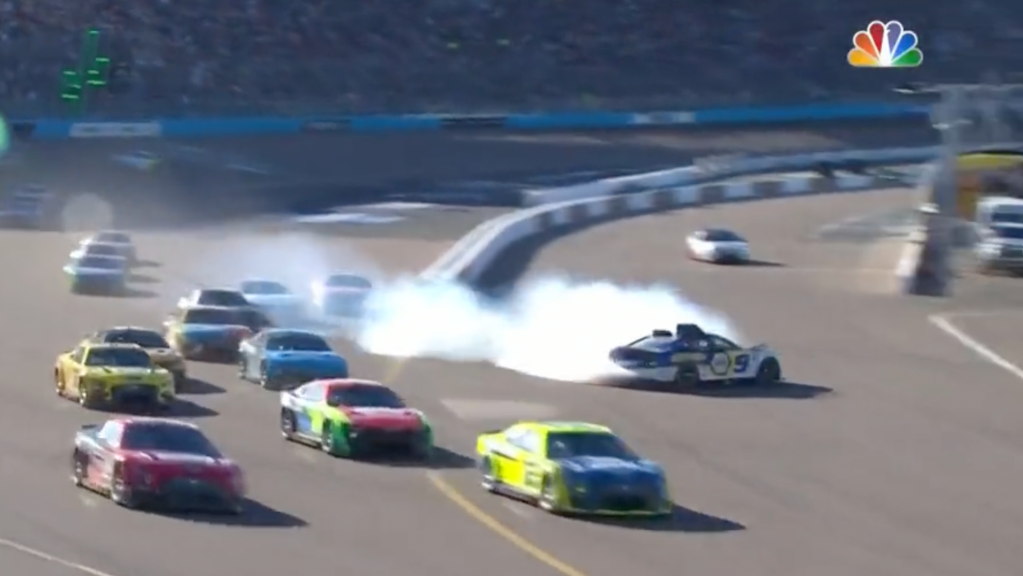 AVONDALE, Ariz. — Chase Elliott’s 2022 NASCAR Cup Series championship hopes pretty much evaporated long before the race ended, thanks to contact with fellow title contender Ross Chastain. And instead of getting on-track revenge or fueling a feud in post-race interviews, Elliott seemingly opted for the high road — the literal opposite of For The Win’s NASCAR Feud of the Week. Racing for what would have been his second career title, Elliott was running in the top-10 for much of the first two stages of the season finale at Phoenix Raceway. But his day went sideways, quite literally, with a little more than 100 laps left at the one-mile desert track. On a Lap 200 restart, Elliott, in the No. 9 Hendrick Motorsports Chevrolet, was running in the inside lane with Chastain in the No. 99 Trackhouse Racing Chevrolet behind him. They both dove down the track to capitalize on the dogleg shortcut after the start-finish line, but the nose of the No. 1 car made contact with the back of the No. 9, sending Elliott spinning and slamming into the inside wall, damaging his car. Chase Elliott spins! Ross Chastain got into him! #Championship4 : @NBC and @Peacock pic.twitter.com/bh9fWCTwcm — NASCAR on NBC (@NASCARonNBC) November 6, 2022 By the time Elliott returned to the track, he was one lap down and never recovered — falling to three laps down at one point. Just like that, his championship hopes vanished, finishing 28th and two laps down while Joey Logano took the checkered flag and claimed his second career championship. When asked about the incident multiple times following the race, Elliott — who still finished with a series-high five wins in 2022 — repeatedly dodged the questions. Chase Elliott was asked about the contact between him and Ross Chastain that essentially ended his championship hopes. #NASCAR pic.twitter.com/HUTPnaACDm — NASCAR on NBC (@NASCARonNBC) November 7, 2022 “Just want to say congratulations to Joey and his team. They did a really good job this entire weekend, and he’s a very deserving champion,” Elliott told NBC Sports when asked about the incident with Chastain. Later when he was asked about what happened from his perspective during his post-race press conference, he said he wasn’t sure and redirected: “Looking forward to the off-season.” Chase Elliott on the incident with Ross Chastain pic.twitter.com/sTFpyqnxw4 — Matt Weaver (@MattWeaverRA) November 7, 2022 “Just disappointed, obviously, ended our day and ended our chance at a win or a championship,” a salty Elliott added when pressed on the contact with Chastain. This was hardly the first time this season Chastain has been aggressive and made contact with a competitor and not even the first time he’s had an incident with Elliott. But while others eyed payback for the No. 1 driver throughout the season, Elliott appeared to have the opportunity to wreck Chastain in the final stage of Sunday’s race but didn’t. From Chastain’s perspective, he said it was “absolutely” a typical racing incident after he “got a better start.” A look at what happened to @chaseelliott from @RossChastain's on-board camera! pic.twitter.com/PhLyGEH7wO — NASCAR (@NASCAR) November 6, 2022 “I got to his left-rear, and he tried to cover it late, and I was already there,” Chastain said. “I feel like it was just hard racing, and I had position. We could have raced down in the corner side-by-side if he had just kept going the way we were going. “I had a really good run. It looked like William [Byron] didn’t get going quite as well as he wanted to. I got to the left of [Elliott] and saw an erratic move that he made to turn left to cover it, but I was already there. … “It’s not what I want to do, but I feel like I had position on him, and he tried to cover it late.” When Elliott was questioned about why he didn’t deal some payback to Chastain, he again dodged the question: “Just proud of my team and appreciate the effort that they put in and the fight that we had for these last nine weeks.” "(function() {var sc = document.createElement(\"script\"), scCnter = document.getElementById(\"container-sdp-voltax-player-01evcfkb10bw5a3nky-0618\"), done = false;sc.src = mm_video_data.endpointUrl + \"\/01evcfkb10bw5a3nky.js\";sc.onload = sc.onreadystatechange = function() {if(!done && (!this.readyState || this.readyState == \"loaded\" || this.readyState == \"complete\")) {sdpVoltax[\"01evcfkb10bw5a3nky-0618\"].initializePlayer( {\"id\":\"01ggr1ng1sj0rcb4ywxh\",\"playlist_id\":\"\",\"player_id\":\"01evcfkb10bw5a3nky\",\"type\":\"video\",\"image\":\"https:\\\/\\\/images2.minutemediacdn.com\\\/image\\\/upload\\\/video\\\/thumbnail\\\/mmplus\\\/01ggr1ng1sj0rcb4ywxh\\\/01ggr1ng1sj0rcb4ywxh-0cc7bb9e593b055a3cac3811fc6daf51.jpg\",\"container_id\":\"01evcfkb10bw5a3nky-0618\"});done = true; sc.onload = sc.onreadystatechange = null; }};scCnter.appendChild(sc);})();"var sdpVoltax = window.sdpVoltax || []; sdpVoltax["01evcfkb10bw5a3nky-0618"] = sdpVoltaxPlayerHandler().start("01evcfkb10bw5a3nky-0618"); List Q&A: We asked a physicist to explain how Ross Chastain's video game move at Martinsville actually worked View 8 items Gallery Every NASCAR Cup Series playoff champion through the years View 19 photos