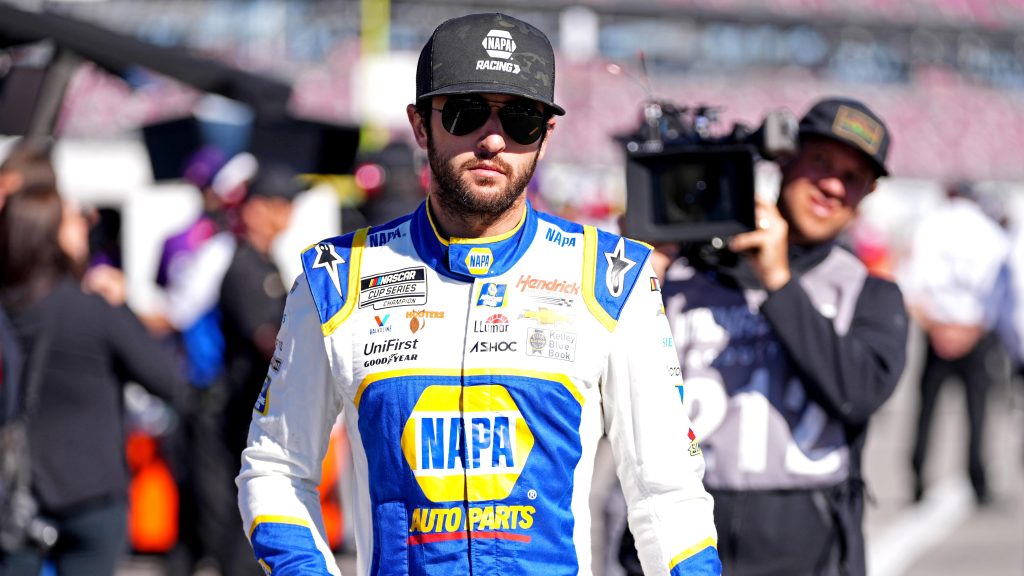 Chase Elliott, like many NASCAR Cup Series drivers, is concerned about the safety of the Next Gen car, which made its debut this season. His and his competitors’ sentiments are extremely understandable, as multiple drivers have said many of the hits and impacts have felt much harder this season in the new car compared with previous years. And two drivers, Kurt Busch and Alex Bowman, have been sidelined this season with concussion-like symptoms following wrecks. Busch has not raced since July after his concussion symptoms appeared following a wreck at Pocono Raceway. And now, Bowman announced Thursday that he won’t compete at Talladega Superspeedway this weekend because he’s experiencing concussion-like symptoms after wrecking at Texas Motor Speedway last Sunday. This week, in response to a tweet from Trackhouse Racing co-owner Justin Marks about the car’s safety, Elliott said, “we should never take steps backwards in any area with a new design.” Then Saturday during a press conference at Talladega, Elliott was asked about his tweet and where he’d like to see NASCAR and the Next Gen car go moving forward. He noted how drivers seemed to be OK after similar wrecks in previous seasons, but this year, there appear to be more injuries. Elliott said: “I don’t feel like we should have ever been in this position to begin with to need to go forward. We should have gone forward with a new opportunity at a new car, in my opinion. You have all of these years of experience and knowledge and time of racing and crashing these cars and teams working on them and building them. It just blows me away that we can have something new in 2022 that offers all of this technology and all of this time and experience of so many super talented people in this sport, and we allow it to go backwards, especially with safety. “It’s just super surprising to me that we allow that to happen. But we did, and now it’s just about how do we go forward from here, making sure we’re making the right choices to improve what we have and keep things like what happened to Alex this week from happening? And what happened to Kurt. Those types of incidents didn’t result in injuries in the past handful of years from just me watching. Obviously, I’m not doctor, but I’ve watched a lot of cars back into the wall and those guys be fine.” Other drivers have also explained that mild-looking crashes have come with harder impacts on them, like when a car hits the wall rear first. “From the get-go, everybody could see that this car was way too stiff,” Kevin Harvick said in July, per NBC Sports. “When I crashed it (at Auto Club Speedway in practice), I thought the car was destroyed and it barely backed the bumper off. It just felt like somebody hit you with a hammer.” Harvick also specifically said he feels that other than his fellow drivers, people in the industry don’t appreciate just how hard these hits are and aren’t taking their complaints seriously. Along with Harvick, Denny Hamlin, Bubba Wallace and Christopher Bell are among those who have expressed similar concerns throughout the season. Elliott continued Saturday at Talladega: “I just hate to see that. No one is immune to it. It could be me next week, or it could be any of my peers or fellow competitors. Nobody wants to see that no matter how much you like or dislike a guy, in my opinion. I just hate to see us go backwards, and I’m afraid that we have in some of those areas. “But look, it’s just about how do we come together and how do we go forward from here. I think there’s a lot of really smart individuals to try and help make that happen, and I’m confident that we will. But it’s crucial that we do, in my opinion, because having guys out during the playoffs right now – or any time for that matter – shouldn’t be happening, and I think it’s taking away from our product on Sunday.” Several drivers throughout the season have noted they’ve suffered some of the hardest hits in their careers this year, and NASCARMAN, NASCAR’s unofficial historian, compiled many of their comments in this detailed thread: And following more recent wrecks and Bowman’s concussion-like symptoms, drivers continue to speak out, urging NASCAR to address the safety of the car: