I tried NASCAR’s crane seats 150 feet over Phoenix Raceway, and it wasn’t actually (that) scary 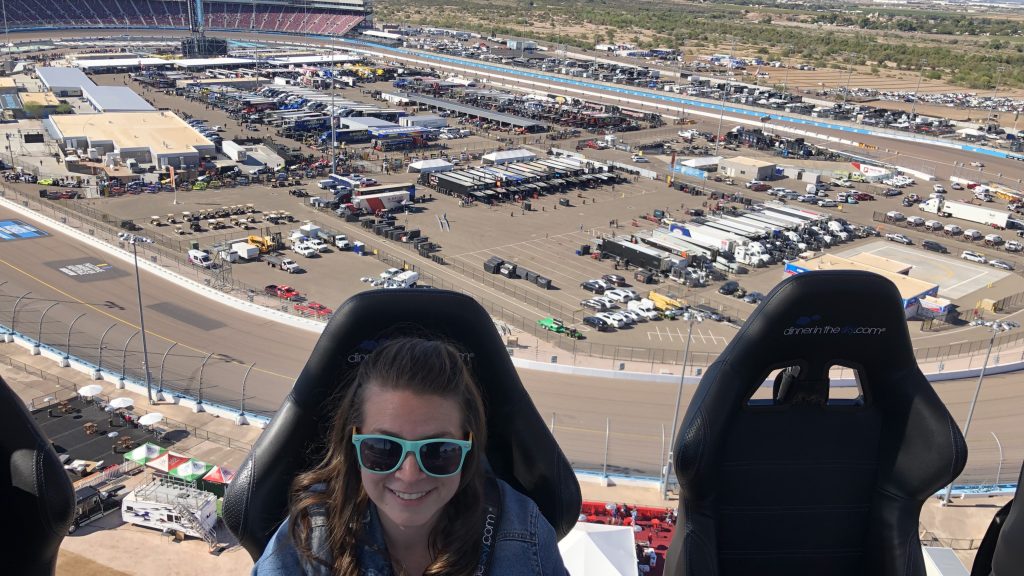 AVONDALE, Ariz. — I am not afraid of heights. Mountains, skyscrapers, rollercoasters, NASCAR spotter stands — all fine. HOWEVER. I do feel a bit uneasy when there’s a sizable gap between my feet and the ground, like on a chairlift or, say, while seated at a large dining table being suspended by a crane 150 feet in the air above a race track. But when I heard NASCAR’s plan to offer guests a bird’s eye view of Phoenix Raceway during its championship weekend, I couldn’t resist. Absolutely had to. Being a coward was not an option here — even though this is one of my few actual lifelong fears — because when would I ever get this opportunity again? Known as the NASCAR Championship Oasis in the Sky, it’s a chance for VIP guests to get the best possible view of the one-mile desert track with its stunning mountain backdrop. The experience is run by Dinner in the Sky Canada, and a crane raises a 22-person table above the track for 30 minutes at a time. With giant cables holding it up, ropes also fall from the platform to the ground where operators periodically turn the table to provide a full 360-degree view, which was gorgeous with mountains on one side and Phoenix’s skyline in the distance on the other. Once everyone on my “flight” was strapped into the chairs — there was, thankfully, not a lot of wiggle room — the crane began raising us. It wasn’t like a carnival ride; it was slow and controlled so much that it really didn’t feel like we left the ground. I didn’t even notice when we first took off. Kenny Loggins’ Danger Zone provided the perfect soundtrack as we slowly rose but also somehow quickly reached 150 feet. Actually, we ended up climbing to 151 feet after someone at the table asked a Dinner in the Sky employee up there with us if the crane operator could go any higher. And luckily, the wind was nearly nonexistent, allowing the handful of reporters floating above the track to just relax, take in the 30-minute experience and enjoy the end of the ARCA West race happening on the track below us. what it looks like from the @phoenixraceway garage pic.twitter.com/pJ5pdZcRiY — Michelle R. Martinelli (@MMartinelli4) November 4, 2022 The ride was unreal and shockingly not nearly as scary as I thought it would be — aside from the terror that briefly consumed me when I inadvertently realized the chairs swivel while we were already in the sky. (They also recline.) Turns out, the only actual thing I was fearful of was dropping my phone. The spectacular view was so distracting I actually forgot how far above the ground my feet were, despite the little footrest (that I could barely reach) underneath my seat. On a gorgeous day with hardly a cloud in the sky with us, it was serene, leisurely and notably chillier up there. The breathtaking view with the track, mountains and desert landscape stretched for miles, and it felt like we could see forever in some directions. This was not like when I drove a race car at Daytona International Speedway earlier this year or the times I flew with the Thunderbirds and got a two-seater ride in an Indy car at the Indianapolis 500. There was no adrenaline or heart-stopping speed, and I wasn’t panicked. It was actually pretty chill and offered the actual best possible view of Phoenix Raceway, which already serves as one of NASCAR’s most beautiful settings. If you have the chance to be suspended by a crane for dinner or even just a brief moment, I’ve gotta recommend it. "(function() {var sc = document.createElement(\"script\"), scCnter = document.getElementById(\"container-sdp-voltax-player-01evcfkb10bw5a3nky-3736\"), done = false;sc.src = mm_video_data.endpointUrl + \"\/01evcfkb10bw5a3nky.js\";sc.onload = sc.onreadystatechange = function() {if(!done && (!this.readyState || this.readyState == \"loaded\" || this.readyState == \"complete\")) {sdpVoltax[\"01evcfkb10bw5a3nky-3736\"].initializePlayer( {\"id\":\"01ggr1ng1sj0rcb4ywxh\",\"playlist_id\":\"\",\"player_id\":\"01evcfkb10bw5a3nky\",\"type\":\"video\",\"image\":\"https:\\\/\\\/images2.minutemediacdn.com\\\/image\\\/upload\\\/video\\\/thumbnail\\\/mmplus\\\/01ggr1ng1sj0rcb4ywxh\\\/01ggr1ng1sj0rcb4ywxh-0cc7bb9e593b055a3cac3811fc6daf51.jpg\",\"container_id\":\"01evcfkb10bw5a3nky-3736\"});done = true; sc.onload = sc.onreadystatechange = null; }};scCnter.appendChild(sc);})();"var sdpVoltax = window.sdpVoltax || []; sdpVoltax["01evcfkb10bw5a3nky-3736"] = sdpVoltaxPlayerHandler().start("01evcfkb10bw5a3nky-3736"); List NASCAR championship: Detailed breakdown, odds of the final 4 drivers competing for a title at Phoenix View 4 items Gallery Every NASCAR Cup Series playoff champion through the years View 18 photos