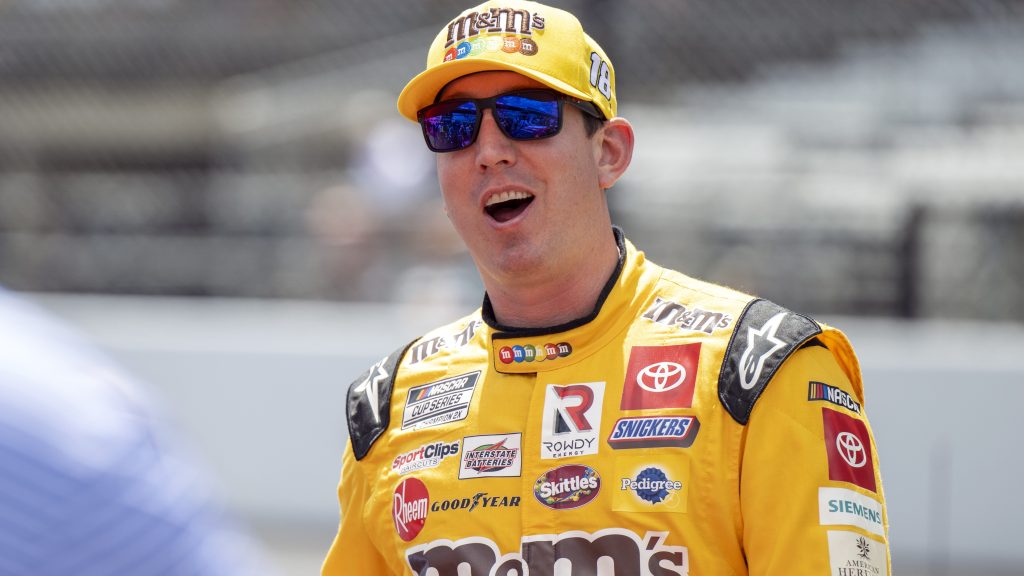 Kyle Busch is officially leaving Joe Gibbs Racing after 15 seasons and two NASCAR Cup Series championships with the powerhouse team. The current No. 18 Toyota driver is in a contract year, and speculation about his future intensified throughout the summer without an announcement. Finally, we have an official answer: Busch is headed to Richard Childress Racing with a deal beginning in 2023. And, for the first time since the 2007 season, he’ll be behind the wheel of a Chevrolet. Busch’s move was first reported by The Athletic on Saturday and confirmed in Tuesday morning’s announcement at the NASCAR Hall of Fame. Busch joked this had been one of the best kept secrets until recently. “On a serious note, this is probably one of the biggest days of my life, my career, and I’m excited about my future,” Busch said prior to making it official. “One team, one owner emerged as the clear choice,” Busch said about his options over the last several months. And when he finally announced he’s going to Richard Childress Racing, he did it à la LeBron James style. “I’m excited to announce that I’ll be taking my talents to Welcome, North Carolina to drive the No. 8 car for Richard Childress Racing starting in 2023.” Richard Childress Racing currently fields two cars: Austin Dillon in the No. 3 Chevrolet and Tyler Reddick in the No. 8 Chevrolet. (Reddick is already set to join 23XI Racing in 2024, and his current team wasn’t thrilled to hear that.) Busch will drive the No. 8 Chevrolet, but the team noted Reddick is under contract next year and will still race for the organization. Richard Childress on Tuesday said the team will run three cars next year. Busch — who has 60 Cup wins and is tied for ninth on the all-time wins list with Kevin Harvick — and Joe Gibbs Racing have been struggling for months to come to terms on a new contract for the No. 18 Toyota driver for 2023 and beyond. But there have been notable challenges, including Busch’s salary price tag, which NBC Sports estimated is north of $10 million, and finding about $20 million in new sponsorship after Mars, the company behind M&Ms, said 2022 will its final season in NASCAR. In July, team owner Joe Gibbs and David Wilson, president of Toyota Racing Development, reiterated their desire and efforts to re-sign Busch and keep him with both the team and manufacturer — especially with his Truck Series team, Kyle Busch Motorsports, being a Toyota organization. It’s unclear what the next steps are for Busch and Kyle Busch Motorsports now that he’s aligned with Chevrolet. Busch said to expect an announcement “shortly.” Wilson said this summer Toyota had “contingency plans” because contract talks with Busch were “in a bad place right now.” While he didn’t specify what those plans are, the team owner’s grandson, Ty Gibbs, could be a reasonable replacement as the 19-year-old rising star continues to see success in the second-tier Xfinity Series and has been filling in at 23XI Racing for injured Kurt Busch, Kyle’s older brother. During Kyle Busch’s announcement, he thanked both Toyota and Joe Gibbs Racing and the team owner himself. Busch is NASCAR’s only active two-time Cup champion, and he’s making his 15th playoff appearance, joining 15 other playoff drivers competing in a 10-race shootout for the title, which began two weekends ago with Erik Jones, a non-playoff driver, winning at Darlington Raceway and Bubba Wallace, another non-playoff driver, winning at Kansas Speedway on Sunday. The next playoff race is Saturday night at Bristol Motor Speedway. Even though Busch and Gibbs parting ways seemed more and more likely as the season carried on with no deal announced, it’s still a stunning development and definitely the end of an era in NASCAR. And it’ll probably take fans some time to get used to seeing Busch piloting a Chevrolet for Richard Childress Racing.