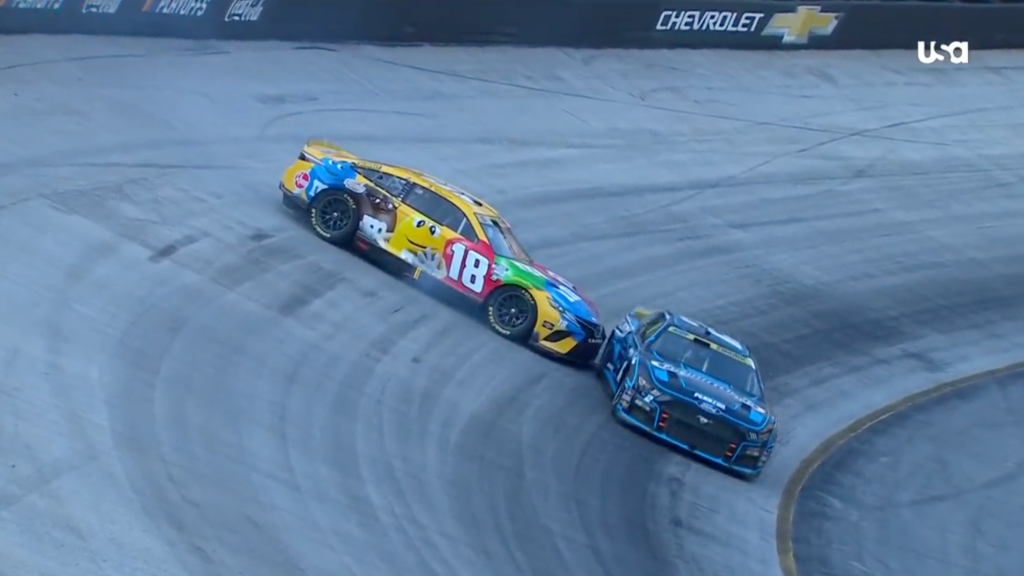 Kyle Busch is a masterful NASCAR driver, and anyone who claims otherwise probably just doesn’t like the polarizing racer very much. He’s one of the most talented drivers in the sport, and during practice Friday at Bristol Motor Speedway, Busch pulled off this amazing save after his car spun and nearly made contact with Austin Cindric. In practice ahead of Saturday night’s postseason elimination race, the first of three in the 10-race Cup Series playoffs, Busch — who announced this week that he’ll switch from Joe Gibbs Racing to Richard Childress Racing in 2023 — seemed to get a little loose in one of the Tennessee short track’s turns and spun a tad as he tried to keep the car from hitting anything. But between the banking and not having total control of his No. 18 Joe Gibbs Racing Toyota, Busch was in a worrisome spot. His car briefly started to slide back down the track just as Cindric in the No. 2 Team Penske Ford was passing by on the inside. Busch probably held the brake down as hard as he possibly could to avoid destroying both his car and Cindric’s. RELATED: Kyle Busch’s signing bonus from Richard Childress was a hilarious reference to his new boss once punching him Seriously, that save from Busch was *thisclose* to ending in disaster for both playoff drivers. And afterward, he explained what happened and that he doesn’t believe his car was damaged in the spin. Busch said, via FOX Sports’ Bob Pockrass: “I didn’t hit anything, but, you know, coming down off the banking, might have touched the nose, but I didn’t feel it. … I turned off into the corner, and it loaded up the right-rear first and steered itself to the bottom. And I had to catch it and it just started heading up towards the wall.” Currently 13th in the playoff standings, Busch is the last driver who would be eliminated at the end of the Round of 16 following Saturday’s Bristol night race is nothing changes. Eight of his 60 career wins have been at Bristol, and he will start the race 21st.