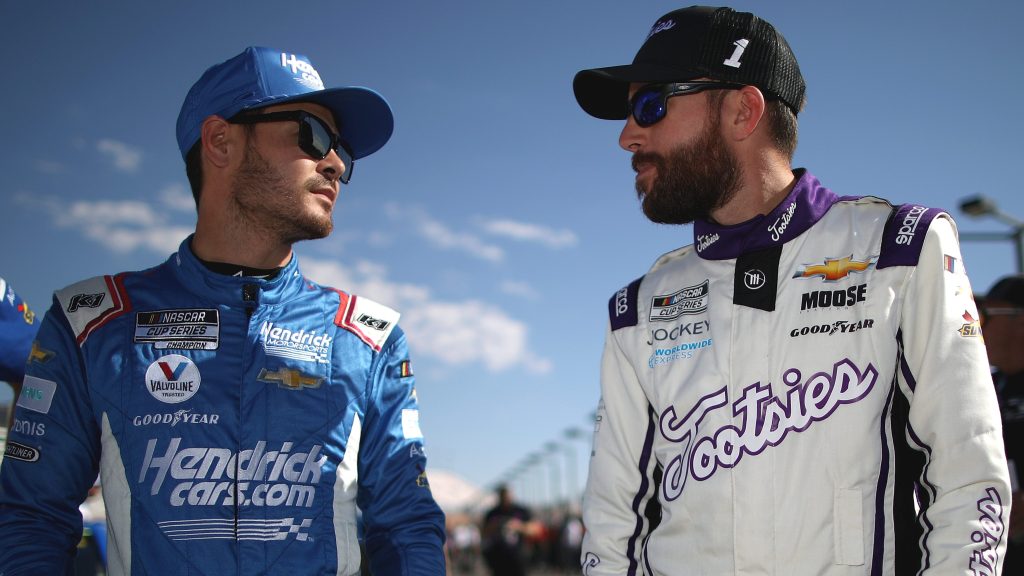 AVONDALE, Ariz. — Ahead of the NASCAR Cup Series championship race Sunday, one storyline has absolutely dominated the racing world, and rightfully so. Ross Chastain pulled off the unthinkable last Sunday at Martinsville Speedway with a video game move on the last lap. With a spot in the title race on the line, he floored it, rode the wall, passed his competitors at a ridiculous rate and snuck into the Championship 4. It was wild, and the physics of it actually worked. But not everyone in the NASCAR garage is a fan. Afterward at Martinsville, 2021 Cup champion Kyle Larson called it “a bad look” for the sport and said he’s embarrassed he tried and failed to do something similar last season at Darlington Raceway. UNBELIEVABLE!@RossChastain floors it along the wall to go from 10th to 5th and advance to the CHAMPIONSHIP! #NASCARPlayoffs pic.twitter.com/9qX3eq7T6h — NASCAR on NBC (@NASCARonNBC) October 30, 2022 Friday at Phoenix, Larson said his opinion on the move — now dubbed the “Hail Melon”as a nod to Chastain’s watermelon farming roots — hasn’t changed. “I’d love to say after listening to all the fans that my opinion has changed because they’re very educated,” Larson said. “But no, it hasn’t.” “It doesn’t take any talent to floor it against the wall and go two seconds quicker than the field,” the No. 5 Hendrick Motorsports Chevrolet driver added. “I don’t think that’s fair. It’s not fair at all.” He acknowledged that it was “crazy,” “awesome” and “took guts.” But he said he’s concerned about safety and consistency, as well as the integrity of the sport. “When a car scares the wall with five [laps] to go and doesn’t even touch the wall, they throw a caution because they want to set up a good finish,” Larson said. “At the end of the race, it should be no different, especially with something obvious like that. … “And it’s nothing personal against Ross. It could be anyone in the field to pull that move, and I would have felt the same way about it. It’s not fair racing.” Larson again pointed to his embarrassment after he tried a similar move in an attempt to get around Denny Hamlin for the lead. “I’ve done it before, so I’m being hypocritical,” Larson continued. “But I’m glad I did not win because I would not have been able to sleep at night and be proud of it, just like I don’t think I’d be proud to be in the final four with a move like that.” "(function() {var sc = document.createElement(\"script\"), scCnter = document.getElementById(\"container-sdp-voltax-player-01evcfkb10bw5a3nky-7649\"), done = false;sc.src = mm_video_data.endpointUrl + \"\/01evcfkb10bw5a3nky.js\";sc.onload = sc.onreadystatechange = function() {if(!done && (!this.readyState || this.readyState == \"loaded\" || this.readyState == \"complete\")) {sdpVoltax[\"01evcfkb10bw5a3nky-7649\"].initializePlayer( {\"id\":\"01ggr1ng1sj0rcb4ywxh\",\"playlist_id\":\"\",\"player_id\":\"01evcfkb10bw5a3nky\",\"type\":\"video\",\"image\":\"https:\\\/\\\/images2.minutemediacdn.com\\\/image\\\/upload\\\/video\\\/thumbnail\\\/mmplus\\\/01ggr1ng1sj0rcb4ywxh\\\/01ggr1ng1sj0rcb4ywxh-0cc7bb9e593b055a3cac3811fc6daf51.jpg\",\"container_id\":\"01evcfkb10bw5a3nky-7649\"});done = true; sc.onload = sc.onreadystatechange = null; }};scCnter.appendChild(sc);})();"var sdpVoltax = window.sdpVoltax || []; sdpVoltax["01evcfkb10bw5a3nky-7649"] = sdpVoltaxPlayerHandler().start("01evcfkb10bw5a3nky-7649"); List Q&A: We asked a physicist to explain how Ross Chastain's video game move at Martinsville actually worked View 8 items Gallery Every NASCAR Cup Series playoff champion through the years View 18 photos