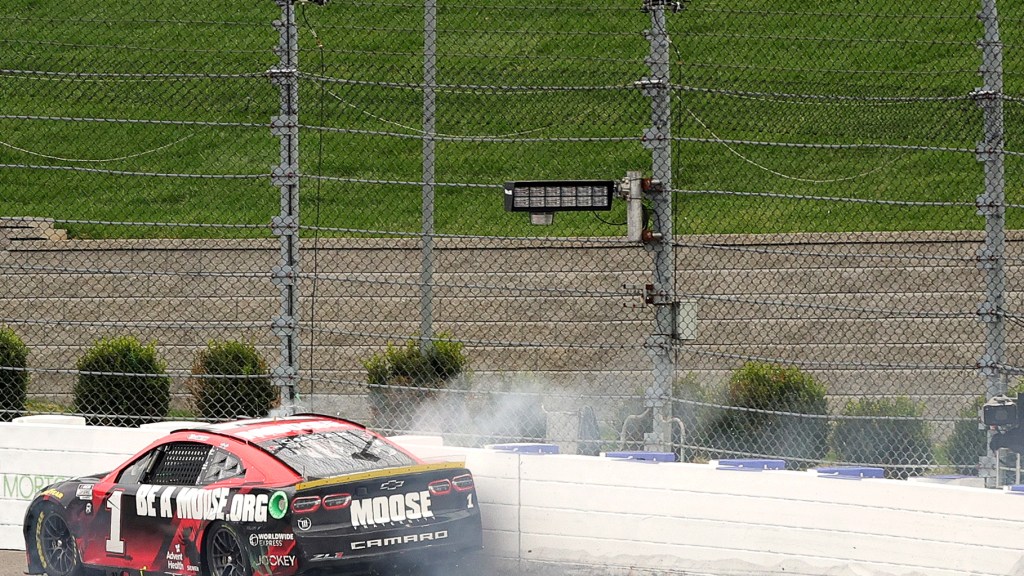 Ross Chastain didn’t hold back Sunday at Martinsville Speedway on the last lap of the race. He did everything he could think of to get himself and team into NASCAR’s Championship 4 and delivered a truly jaw-dropping move that had the racing world in awe. Seriously though, so many people — the broadcasters, fellow drivers, team members, fans, pretty much everybody — said they had never seen anything like what Chastain on the last lap. After realizing he still needed to gain a couple spots to make the championship race, the No. 1 Trackhouse Racing Chevrolet driver shifted into fifth gear, rode the wall and shot around the 0.526-mile track, advancing from 10th to fifth in a matter of seconds. It was actually unreal, and it was enough to get Chastain into the championship. UNBELIEVABLE!@RossChastain floors it along the wall to go from 10th to 5th and advance to the CHAMPIONSHIP! #NASCARPlayoffs pic.twitter.com/9qX3eq7T6h — NASCAR on NBC (@NASCARonNBC) October 30, 2022 There have been some amazing moments since Chastain’s wild Martinsville move, including him saying it was actually inspired by a video game. But unquestionably one of the best is NASCAR compiling the radio audio from different teams at the end of the race as they reacted to Chastain’s gutsy call. With spotters talking to their drivers and guiding them through the final lap, they were all in disbelief, and their reactions were priceless. "I can't believe what I just saw." #NASCARPlayoffs pic.twitter.com/Eqw7tyodZF — NASCAR (@NASCAR) November 1, 2022 Christopher Bell won the Martinsville race, Joey Logano previously won and Chase Elliott joined Chastain in making the title race based on points in the standings. Joey Logano and the No. 22 Ford team: “Holy cow, I guess it does work.” “Holy [expletive]! Did you see that?! Hahahaha.” Chase Briscoe and the No. 14 Ford team: “Oh my god — coming to the checkered flag — I can’t believe what I just saw.” “That’s literally the coolest thing I’ve ever seen in my life.” Bubba Wallace and the No. 45 Toyota team “Watch it, the 1 ripping this outside wall in the fence. Holy [expletive]! Unbelievable.” “WOOOWWWW!” “That’s the damndest thing I’ve ever seen the 1 done.” Erik Jones and the No. 45 Chevrolet team “The [expletive] was the 1 doing?… He really passed people doing that?” “Yeah, he got in the final four doing that.” “Holy [expletive].” Chase Elliott and the No. 9 Chevrolet team “Coming to the checkered, gap of one. Cover your bottom up off… what in the hell?” Denny Hamlin and the No. 11 Toyota team Hamlin and his team were battling with Chastain and co. for the final championship spot, and you can hear the dejection in Hamlin’s voice when he realizes he got beat. “I guess we just lost on that?” “Well, I’ve never seen anything like it. But Bell wins, he’s in. And the 1 Hail Mary’d the fence in [Turns] 3 and 4 and got it.” “I did all I could do, Chris,” Hamlin said to Chris Gabehart, his crew chief. Ross Chastain and the No. 1 Chevrolet team After the race, Chastain said he was told he needed two spots in the race to make the championship, and that’s when he decided to just go for it. “Need two spots here.” “Gotta get them?” Chastain asks. “Yeah, gotta get them, need two.” “Keep coming. Hang on, man.” “Talk to me, boys.” “You made the transfer! YOU MADE THE TRANSFER, MAN! That was [expletive] ridiculous, dude!” “I don’t know how long you’ve been sitting on that move, but that was [expletive] incredible.” "(function() {var sc = document.createElement(\"script\"), scCnter = document.getElementById(\"container-sdp-voltax-player-01evcfkb10bw5a3nky-8970\"), done = false;sc.src = mm_video_data.endpointUrl + \"\/01evcfkb10bw5a3nky.js\";sc.onload = sc.onreadystatechange = function() {if(!done && (!this.readyState || this.readyState == \"loaded\" || this.readyState == \"complete\")) {sdpVoltax[\"01evcfkb10bw5a3nky-8970\"].initializePlayer( {\"id\":\"01ggr1ng1sj0rcb4ywxh\",\"playlist_id\":\"\",\"player_id\":\"01evcfkb10bw5a3nky\",\"type\":\"video\",\"image\":\"https:\\\/\\\/images2.minutemediacdn.com\\\/image\\\/upload\\\/video\\\/thumbnail\\\/mmplus\\\/01ggr1ng1sj0rcb4ywxh\\\/01ggr1ng1sj0rcb4ywxh-0cc7bb9e593b055a3cac3811fc6daf51.jpg\",\"container_id\":\"01evcfkb10bw5a3nky-8970\"});done = true; sc.onload = sc.onreadystatechange = null; }};scCnter.appendChild(sc);})();"var sdpVoltax = window.sdpVoltax || []; sdpVoltax["01evcfkb10bw5a3nky-8970"] = sdpVoltaxPlayerHandler().start("01evcfkb10bw5a3nky-8970"); List Ross Chastain pulled off a brilliant video game move to advance to NASCAR’s title race, and fans were stunned View 5 items Gallery NASCAR history: Every Daytona 500 champion since 2000 View 23 photos