Ross Chastain pulled off a brilliant video game move to advance to NASCAR’s title race, and fans were stunned 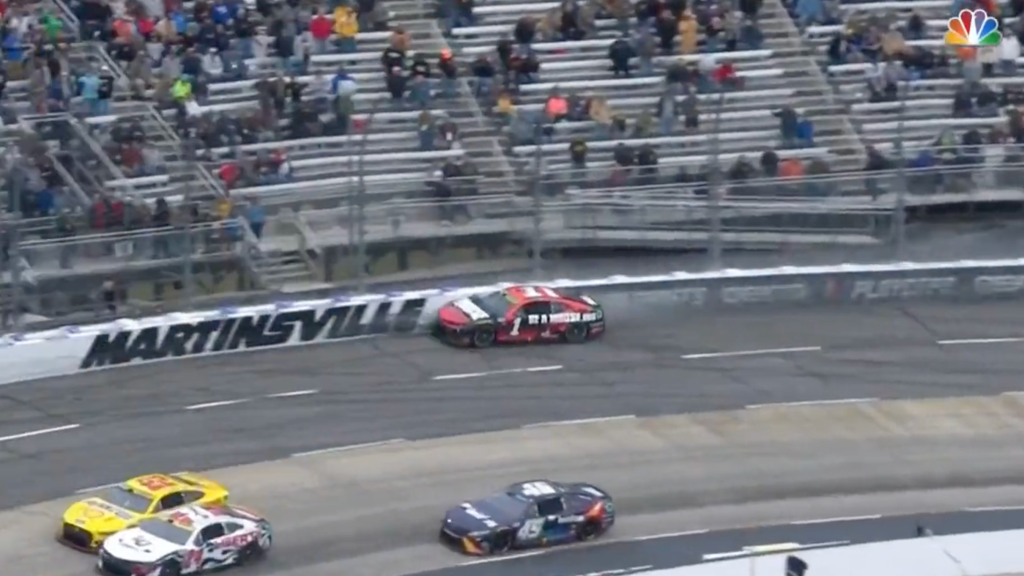 In the final race before NASCAR’s championship weekend, Christopher Bell in a must-win situation stormed to the front of the field at Martinsville Speedway on Sunday, took the checkered flag and locked himself into the Championship 4. But the late-race jaw-dropper came from Ross Chastain, another playoff driver who pulled off a stunning last-lap move to edge Denny Hamlin to the finish line and advance to the Championship 4 as well. Late in the Martinsville race, Bell had the lead with only a couple laps left. As the point standings updated throughout the race, Chastain and Hamlin were battling for the final championship transfer spot. And just when it looked like Hamlin would hold onto his slight advantage, Chastain shot around the 0.526-mile track, barely beat Hamlin to the finish line and stole the last remaining Championship 4 spot. It was a wild video game kind of move. Just legendary stuff. UNBELIEVABLE!@RossChastain floors it along the wall to go from 10th to 5th and advance to the CHAMPIONSHIP! #NASCARPlayoffs pic.twitter.com/9qX3eq7T6h — NASCAR on NBC (@NASCARonNBC) October 30, 2022 Watching this on repeat. Speechless pic.twitter.com/bKuxHoDCu7 — Trackhouse Racing (@TeamTrackhouse) October 30, 2022 Instead of muddling through traffic in the inside lanes, Chastain in the No. 1 Trackhouse Racing Chevrolet took the empty outside lane and flew around the track on the last lap, scraping the wall for much of it. “No one’s ever gone through [Turns] 3 and 4 that fast ever!” NBC Sports’ Rick Allen said on the broadcast, which also noted Chastain went from 10th place to fifth on the last lap. Chastain’s in-car view of his last-lap move is even crazier: THE MOVE THAT SENDS ROSS CHASTAIN TO THE #CHAMPIONSHIP4! pic.twitter.com/67Ku712XZf — NASCAR (@NASCAR) October 30, 2022 HAVE YOU EVER SEEN ANYTHING LIKE THAT IN YOUR LIFE?!?! — Trackhouse Racing (@TeamTrackhouse) October 30, 2022 In fact, Chastain’s last lap was slightly less than two seconds faster than Bell’s last lap. Obviously destroying the right side of your race car isn’t ideal, but in a now-or-never situation, Chastain floored it around the short track and it paid off. Justin Marks says he didn’t know what Ross Chastain did was possible and has no idea when his driver thought to it. But Marks loves having Chastain in his race cars pic.twitter.com/nceRUjt5rL — Kelly Crandall (@KellyCrandall) October 30, 2022 “Great move, brilliant,” Hamlin later told NBC Sports. In addition to Bell and Chastain, Chase Elliott and Joey Logano round out the final four — though Logano was previously guaranteed a spot thanks to a win in the Round of 8.