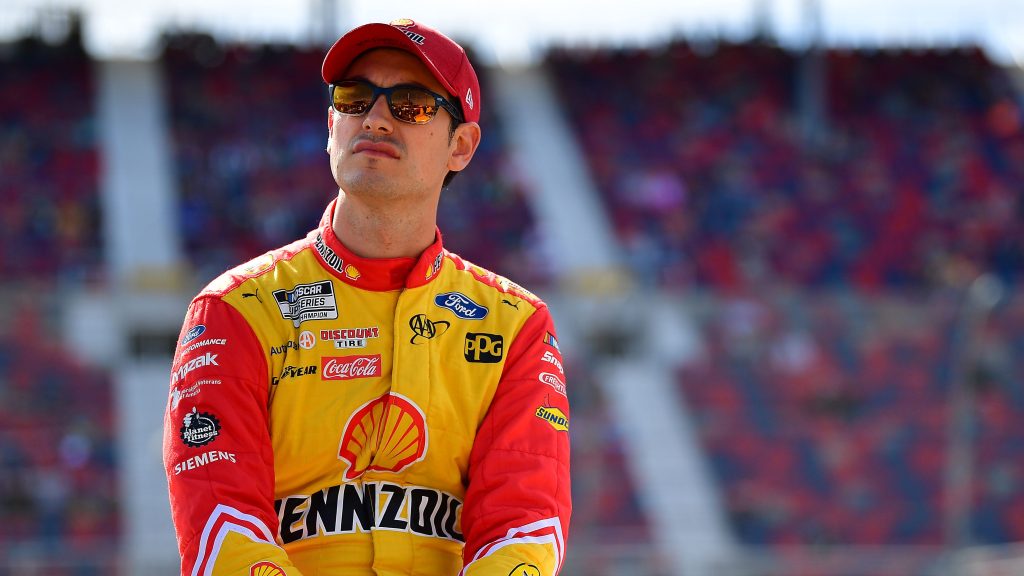 PHOENIX — After 35 races, the NASCAR Cup Series season builds toward No. 36, the season finale at Phoenix Raceway where, after the 10-race playoffs, the latest champion is crowned. But a couple of the 2022 Championship 4 drivers would like to see championship weekend bounce to different tracks around the country, comparable to the Super Bowl, instead of remaining at one track for several years at a time. “I think of the Super Bowl, the impact it has when it comes to a new city, how it kind of makes maybe the stadium better but also that city,” said Joey Logano, NASCAR’s 2018 champion who’s in the running for his second title Sunday, starting from the pole. “I think they should bid it out. The highest bidder — we should go to that track.” Related Meet the artist who live paints NASCAR’s champion within minutes of the checkered flag at Phoenix Under the current playoff format, which was implemented in 2014, the postseason begins with 16 drivers, and the schedule is divided into four rounds. The first three rounds consist of three races, and at the end of each round, four drivers are eliminated from contention. Following the first nine playoff races is a winner-take-all finale, which has been at Phoenix since 2020 when it replaced Homestead-Miami Speedway, which hosted championship weekend for nearly two decades. (Meg Oliphant/Getty Images) Ahead of the third season with Phoenix hosting the finale, For The Win asked the Championship 4 drivers what one thing they’d change about the playoff format. “It’s pretty good, isn’t it? There’s always drama since we’ve been doing it,” Logano, whose stance on this topic is not new but remains strong. “The only thing I would change is I would move the final race from track to track, year to year,” the No. 22 Team Penske Ford driver continued. “I know that’s probably not possible with a lot of deals in place and all. … I’m sure there’s a lot more business behind that that I have no idea how it works. I wouldn’t be against switching it up and trying different tracks all the time, giving fans maybe local that can’t come to a race a chance to see it.” Related I tried NASCAR’s crane seats 150 feet over Phoenix Raceway, and it wasn’t actually (that) scary Chase Elliott, the 2020 champion also racing for his second one, agreed with Logano. He praised Homestead and Phoenix for being great stops and producing thrilling competition. And even though there are a variety of logistical concerns, he said it’s crucial that the championship race rotate. “I certainly understand that the time of year puts you in a bit of a bind with weather in certain areas,” the No. 9 Hendrick Motorsports Chevrolet driver noted. “You don’t want to go somewhere super cold, but I think it’s important to keep moving the race around and give other tracks an opportunity. “But there’s a lot of logistics in there, who owns the track, so on and so forth. So this has been a great stop for us though. I’ve enjoyed my time coming out here, but I think we should keep it moving.” Maybe not every year like the Super Bowl, Elliott added, suggesting tracks get the title race for “a handful” of years and then switching it up between one-mile and 1.5-mile tracks, along with shorter ones too. “I think Bristol [Motor Speedway] is a great choice,” he said. (Sean Gardner/Getty Images) Since the 2020 season, the playoff elimination races have been at Bristol, Charlotte Motor Speedway’s Roval and Martinsville Speedway and will continue to be through at least the 2023 season. Ending with the Roval — a half-oval, half-road course circuit — the Round of 12 tracks also include Texas Motor Speedway and Talladega Superspeedway to create arguably the most chaotic and unpredictable playoff round. “They got it nailed pretty good,” said Ross Chastain of the playoff format and schedule. The No. 1 Trackhouse Racing Chevrolet driver brilliantly raced his way into the Championship 4 with a wild video game move at Martinsville last weekend. Related Jimmie Johnson is back in NASCAR, now as a co-owner, part-time driver starting with 2023 Daytona 500 “They got their races where they are in order through trial and error over the years and moving them around. They create big moments, from the Roval to Talladega.” He said he’d maybe suggest adding a true road course to the playoffs, “but I don’t know what track I would pull out.” As for Christopher Bell — the fourth championship contender this season behind the wheel of the No. 20 Joe Gibbs Racing Toyota — he’d prefer to scrap the whole playoff format and revert back to a season-long championship chase, which was abandoned after the 2003 season. But that might be the most unrealistic suggestion of them all. “I’ve always been a traditional racer growing up,” Bell said. “For me, I would rather have a whole-season champion and go out of cumulative points.” "(function() {var sc = document.createElement(\"script\"), scCnter = document.getElementById(\"container-sdp-voltax-player-01evcfkb10bw5a3nky-9816\"), done = false;sc.src = mm_video_data.endpointUrl + \"\/01evcfkb10bw5a3nky.js\";sc.onload = sc.onreadystatechange = function() {if(!done && (!this.readyState || this.readyState == \"loaded\" || this.readyState == \"complete\")) {sdpVoltax[\"01evcfkb10bw5a3nky-9816\"].initializePlayer( {\"id\":\"01ggr1ng1sj0rcb4ywxh\",\"playlist_id\":\"\",\"player_id\":\"01evcfkb10bw5a3nky\",\"type\":\"video\",\"image\":\"https:\\\/\\\/images2.minutemediacdn.com\\\/image\\\/upload\\\/video\\\/thumbnail\\\/mmplus\\\/01ggr1ng1sj0rcb4ywxh\\\/01ggr1ng1sj0rcb4ywxh-0cc7bb9e593b055a3cac3811fc6daf51.jpg\",\"container_id\":\"01evcfkb10bw5a3nky-9816\"});done = true; sc.onload = sc.onreadystatechange = null; }};scCnter.appendChild(sc);})();"var sdpVoltax = window.sdpVoltax || []; sdpVoltax["01evcfkb10bw5a3nky-9816"] = sdpVoltaxPlayerHandler().start("01evcfkb10bw5a3nky-9816"); List Ross Chastain pulled off a brilliant video game move to advance to NASCAR’s title race, and fans were stunned View 5 items Gallery Every NASCAR Cup Series playoff champion through the years View 18 photos