Why Ross Chastain probably won’t attempt his Martinsville move any time soon: ‘It was not pleasant’ 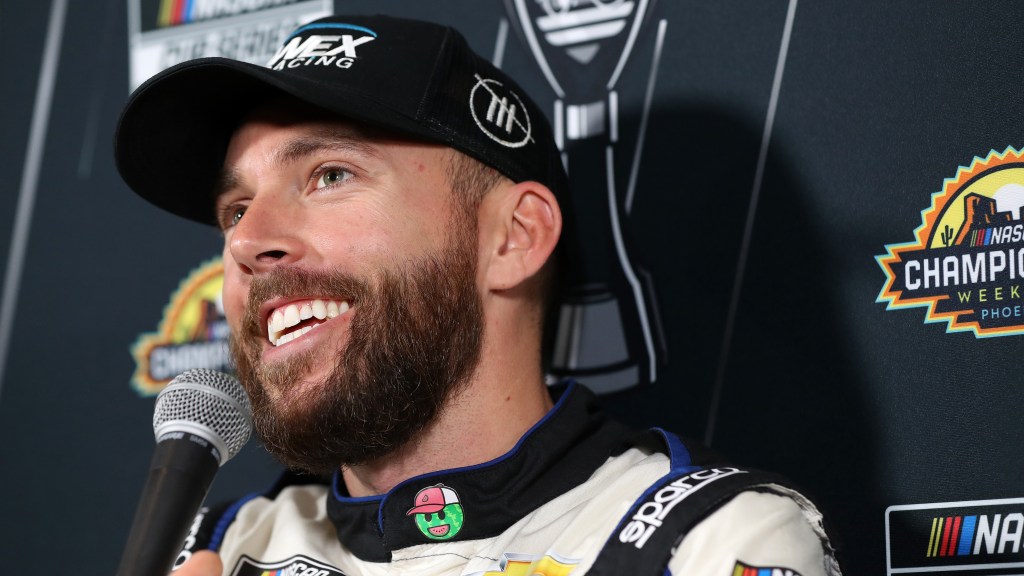 PHOENIX — Even though Ross Chastain’s video game-inspired move at Martinsville Speedway last Sunday was a jaw-dropping feat, there’s a good chance he’ll never attempt it again. It would not only require a repeat of the perfect scenario to pull that off successfully again, but he said the move — now dubbed the “Hail Melon” as a nod to his watermelon farming roots — was fairly uncomfortable for him in the cockpit of the No. 1 Trackhouse Racing Chevrolet. “Why it worked, I don’t know,” Chastain said Thursday at NASCAR Media Day ahead of the Cup Series championship race Sunday at Phoenix Raceway, where he’ll race against Chase Elliott, Joey Logano and Christopher Bell for the title. “I have no ideas or plans to ever do that again because it was not pleasant.” UNBELIEVABLE!@RossChastain floors it along the wall to go from 10th to 5th and advance to the CHAMPIONSHIP! #NASCARPlayoffs pic.twitter.com/9qX3eq7T6h — NASCAR on NBC (@NASCARonNBC) October 30, 2022 For The Win spoke with physicist Dr. Diandra Leslie-Pelecky, who explained why and how the centripetal force worked in Chastain’s favor. She noted that because of the weight and speed of the car, it required a tremendous amount of turning force, which she estimated would be about 18,079 pounds and an acceleration of around five gs. “I’m telling you, man, like, you can lay it into that wall as easy as you want to,” Chastain added. “You’re still driving a 3,500-pound race car into a steel wall at a high rate of speed. It is not pleasant and not something I want to do just in general.” THE MOVE THAT SENDS ROSS CHASTAIN TO THE #CHAMPIONSHIP4! pic.twitter.com/67Ku712XZf — NASCAR (@NASCAR) October 30, 2022 And to be sure, Chastain’s successful Martinsville was unprecedented in NASCAR and outside of a video game. With a spot in the Championship 4 on the line, the No. 1 team said on the radio that Chastain needed to gain two spots to contend for the title. So he shifted into fifth gear, floored it and rode the outside wall of the 0.526-mile track to the finish line, passing drivers at a ridiculous rate while driving more than 50 miles an hour faster than a typical run through Turns 3 and 4. Amazingly, it worked — though it destroyed his car, surely adding to his discomfort behind the wheel. “I look back at it, I look at the physics of it, I have people explain to me what happened, what I felt, why that car did not slow down, why it kept air in the tires,” Chastain said. “The right front suspension broke, the right front upper control arm is broken, but I was able to get across the line before I could feel it. Down into one, I kept it pinned on the wall because it was broken.” Not every driver was a fan of it, however. Although Chastain captured global attention from the racing world with Formula 1 and IndyCar drivers sharing their wowed reactions, Kyle Larson described it as “embarrassing” and “a bad look” for the sport — noting he’s also embarrassed for attempting something similar last year at Darlington Raceway. And some think NASCAR should implement a rule outlawing it. But regardless of who thinks it was cool and who thinks it should be barred, Chastain said pretty much no one believes he didn’t practice it on a simulator and didn’t plan to do it before the last-lap white flag came out. “Why doesn’t anybody believe me?” he said. That includes fellow title contender Joey Logano, who told NASCAR even he’s thought for years about trying to pull off a similar move before. Chastain also said Thursday that although his Trackhouse teammate, Daniel Suárez, tried it this week on a simulator, the No. 1 driver didn’t. And even if he thought he could somehow pull off the “Hail Melon” again, he’s not sure it could work outside of Martinsville, NASCAR’s shortest track. That’s a sentiment Leslie-Pelecky agreed with, noting that “it won’t work at most race tracks.” So if the move turns out to be a one-time thing or an extremely seldom-used trick, it was still unbelievable and understandably captivated motor sports fans everywhere. “Sometimes I watch the clip, and it doesn’t seem like it’s me in the car or even my car, probably because it’s like a blur,” Chastain added. “It just flies by everybody.” "(function() {var sc = document.createElement(\"script\"), scCnter = document.getElementById(\"container-sdp-voltax-player-01evcfkb10bw5a3nky-5474\"), done = false;sc.src = mm_video_data.endpointUrl + \"\/01evcfkb10bw5a3nky.js\";sc.onload = sc.onreadystatechange = function() {if(!done && (!this.readyState || this.readyState == \"loaded\" || this.readyState == \"complete\")) {sdpVoltax[\"01evcfkb10bw5a3nky-5474\"].initializePlayer( {\"id\":\"01ggr1ng1sj0rcb4ywxh\",\"playlist_id\":\"\",\"player_id\":\"01evcfkb10bw5a3nky\",\"type\":\"video\",\"image\":\"https:\\\/\\\/images2.minutemediacdn.com\\\/image\\\/upload\\\/video\\\/thumbnail\\\/mmplus\\\/01ggr1ng1sj0rcb4ywxh\\\/01ggr1ng1sj0rcb4ywxh-0cc7bb9e593b055a3cac3811fc6daf51.jpg\",\"container_id\":\"01evcfkb10bw5a3nky-5474\"});done = true; sc.onload = sc.onreadystatechange = null; }};scCnter.appendChild(sc);})();"var sdpVoltax = window.sdpVoltax || []; sdpVoltax["01evcfkb10bw5a3nky-5474"] = sdpVoltaxPlayerHandler().start("01evcfkb10bw5a3nky-5474"); List NASCAR championship: Predicting the winner of the 2022 Cup Series title View 2 items Gallery Every NASCAR Cup Series playoff champion through the years View 18 photos