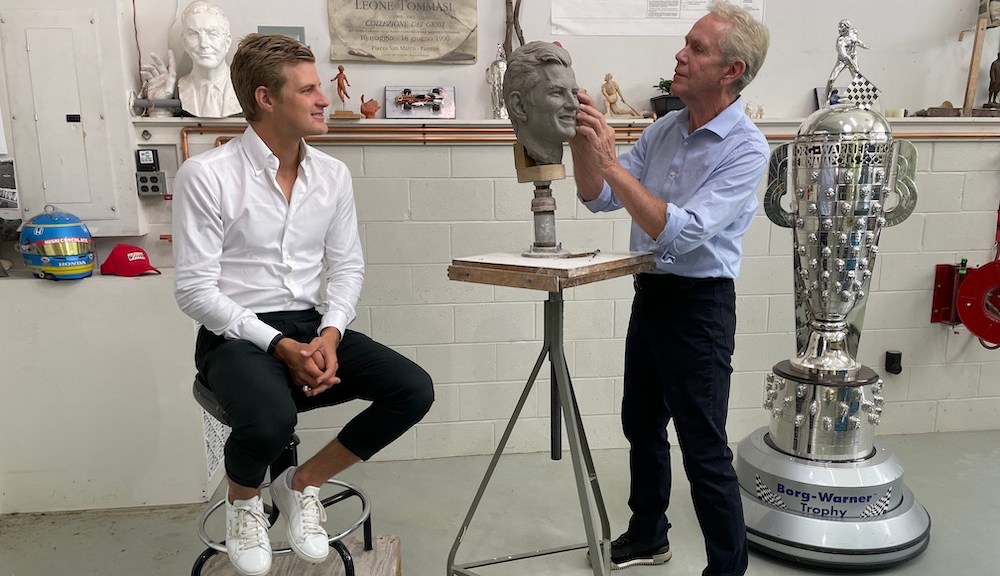 Marcus Ericsson fears his girlfriend is a bigger fan of the clay bust sculpted by Will Behrends than the actual head on his shoulders. Behrends’ version of the Indy 500 winner has one major advantage for Iris: It doesn’t talk back. Sitting by the pool in Tryon, North Carolina, where the Swede and Iris were joking with each other and relaxing on Tuesday, the Chip Ganassi Racing driver took a few moments to reflect on his life-changing victory in May that led him to take part in one of the event’s final traditions in posing for Behrends and having his likeness added to the $3 million BorgWarner trophy. “I was impressed,” Ericsson told RACER. “He’s done a good job. This is the cool thing with the 500, all the traditions and all the things you get to do after winning. And this is probably one of the very coolest things with this sculpture and getting your face on the trophy. I think that’s pretty incredible and pretty unique in the sporting world.” Indy 500 winners have a few days to celebrate the achievement before returning to the IndyCar circuit and racing the following weekend. With the season now over, Ericsson’s enjoying the opportunity to continue celebrating the win without the pressures of driving the No. 8 Honda to worry about. “It’s tough, because you go straight from the 500 and the season gets so intense from then onwards with so many races, and obviously, I was right in the thick of that championship hunt for the rest of the year,” he said. “So you have to put all your efforts into that. And you put so much focus and determination to try and win that championship, it’s a bit hard to really enjoy and embrace the fact that I won the 500. “So going on a trip like this, and going through this whole process with the sculpturing, it’s been a new chance to enjoy the result we had in May. And it’s not confirmed yet, but I think we might get to bring the BorgWarner trophy to Sweden, so that would be amazing.” Ericsson had the honor of being Behrends’ 33rd Indy 500 winner to sit for the BorgWarner trophy. He’s also becoming accustomed to being introduced as the winner of the world’s biggest open-wheel race. “I think the biggest change since winning is just the fact that you will always be presented as the Indy 500 winner and that’s going to be with me for the rest of my life,” he said. “And also, in the racing industry, you move up a lot of steps and also with the fans because of the 500 There’s been a lot more focus on me, which is different, but I’m very proud of what we achieved. “We had a plan going into the month of May and we would follow that plan and execute that plan to perfection. Really, we were strong all month, we did an excellent race and it was just it was just all those things combined for Chip Ganassi Racing. So doing this sculpture and knowing it will be on the trophy for all of us forever, it just makes what we did even more special.”