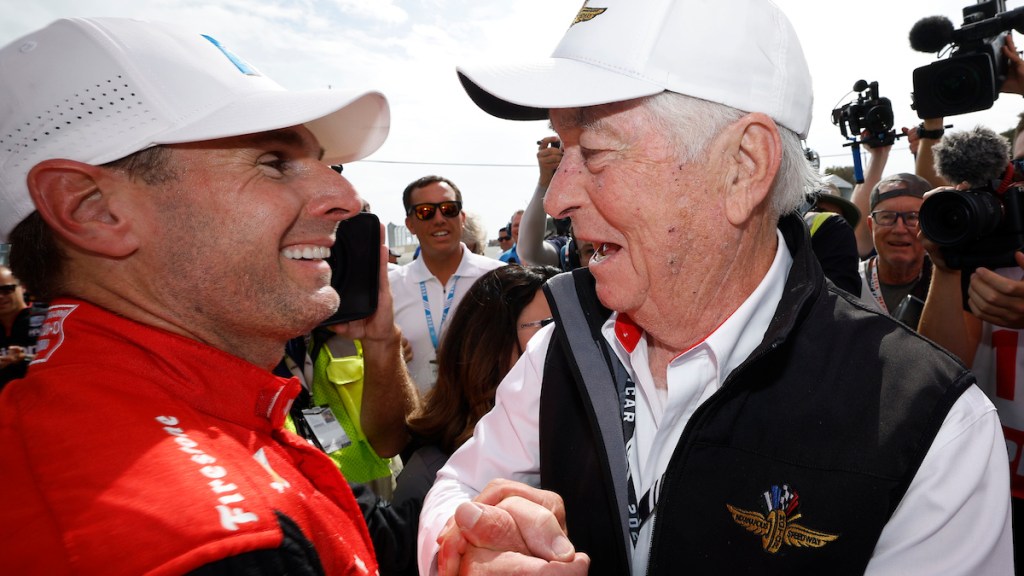 Will Power won the championship, Alex Palou won the race and Josef Newgarden came close to upstaging both of them in a frantic NTT IndyCar Series title-decider at Laguna Seca. The No. 12 Team Penske Chevy started from pole and Power really only needed to not have anything go too far sideways in order to claim the Astor Cup for the second time of his career. But when the time came, the biggest threat among his four rivals proved to be the one that started the day with arguably the greatest disadvantage: Newgarden had lined up on the back row of the grid after a mistake at the start of qualifying yesterday. Power had mused after qualifying that a mistake on Saturday could actually be turned into a benefit on Sunday because it meant starting the race with more tires available, and that potentially proved to be one of the aces in Newgarden’s hand – all five sets that were bolted onto the No. 2 Team Penske Chevy during Sunday afternoon still bore their stickers. The sole yellow of the afternoon helped him a little too, because it cut everyone else’s second stint a little short and brought him more into synch with the frontrunners. But neither of those fully explain why he had such a good view of the frontrunners when the yellow waved on lap 40 in the first place – that was all him. Starting 25th, he made up six places in the first four laps despite being on the harder black Firestones. By lap 14, he’d climbed to eighth, helped by a cluster of cars diving into the pits to get rid of their red tires. A couple of laps later he was sixth, and remained in the top 10 once the three-stoppers had completed their first visits to the pits. After the yellow – prompted by the unlucky Callum Ilott, whose hopes of turning his first front row start into a solid finish were ended by an engine failure as the No. 77 Juncos Hollinger car was leaving the pits – Newgarden really came alive. He needed to make one more stop than most of the others up front, but it quickly became apparent that he had everything he needed to make it work. The highlights were three passes at the Corkscrew within five laps, which got him ahead of both of the Arrow McLaren SPs and Power, and his pace in clear air did the rest. Mid-way through the race, he was dropping Power at a rate of around 1.2s per lap. He’d probably have won the race were it not for the fact that Palou had similar speed, but with the added luxury of only needing to make three stops. The Spaniard got ahead of Power to take the lead shortly after the first round of stops and more or less cleared off, building a gap that had blown out to just over half a minute by the time he got to the checkered flag. He might have spent the last couple of months doing everything in his power to get himself out of Ganassi’s No. 10 for next year, but he still gave the team something to celebrate at the final round. It’s fair to say that Penske’s No. 12 crew will be celebrating harder, though. Power’s plan to spend all afternoon controlling the race from the front didn’t go according to the script – he only had the one set of sticker blacks left for the race, which he saved for the last stint, and also found himself wrestling the car through the second stint after a wing change during the first stop took the handling in the wrong direction. But he was fast enough for third, and in the big picture, third was enough. “I just knew I had to absolutely get the most out of those stints,” Power said. “And not lose any more positions. I had to drive the thing today. It was on the edge, very loose and…man, what a relief. What a relief to get that done.” None of the other championship hopefuls were a significant factor, with Penske’s Scott McLaughlin back in sixth, Marcus Ericsson navigating a scrappy afternoon en route to ninth, and Scott Dixon attributing a chunk of his 12th place to a four-stopper that kept dumping him back into traffic. Felix Rosenqvist ran among the top 10 all afternoon on his way to an eventual fourth ahead of RLL’s Christian Lundgaard, whose fifth place was more than enough to secure the Rookie of the Year title after rival David Malukas endured a frustrating run to 13th. RESULTS