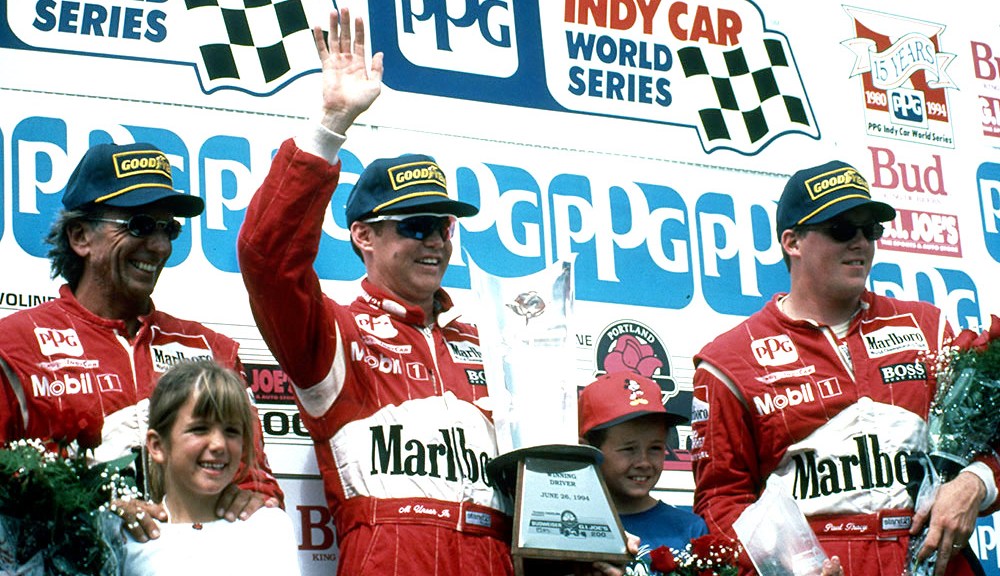 ABOVE: Penske’s 1994 trio locked out the podium at Portland during one of many dominant showings. As I stood on pit lane Sunday afternoon in Monterey and watched Will Power and the No. 12 Team Penske crew go wild after winning the NTT IndyCar Series championship, I couldn’t help but think back to 1994 and being on the very same pit lane where Al Unser Jr. was crowned as Team Penske’s CART IndyCar Series champion. The parallels, some 28 years apart, are remarkable.  In 1994, using a chassis of its own design, Penske’s PC23-Ilmor Indy car utterly dominated CART as drivers Little Al, Emerson Fittipaldi and Paul Tracy savaged the field. From 16 rounds, they amassed 12 wins — a 75 percent strike rate — for the year, which spoke to the comical advantage the team held over the opposition. Unser was responsible for eight of those victories for Penske, leading home one of the most lopsided team-based performances at the Indianapolis 500 on record, which propelled the New Mexican to his second CART title and a Penske 1-2-3 in the championship.  Fittipaldi claimed one win in the twilight of his career and used immense consistency with 10 podiums to secure second in the points. And in what was his second full season with Penske, young Canadian phenom Tracy earned three wins for The Captain to take third in the standings, well clear of Chip Ganassi Racing’s Michael Andretti and the new Reynard 941-Ford package in fourth.  Jump to 2022 and Penske’s conjured 1994 in many ways. Using the same three-driver formula, Will Power, Josef Newgarden and Scott McLaughlin won a combined nine of 17 races using the spec Dallara DW12 chassis powered by Chevrolet engines, good for 53 percent of all victories on the season.  Although he fell one position short of winning the championship, Newgarden played the role of Little Al, leading all drivers with five wins. Power took a page from Emmo, matching him with a single win and coming up one shy with nine podiums, but those were all he needed to earn his second championship. And McLaughlin, the junior member of Penske’s trio — just like Tracy — also used his second full season with the team to produce the same amount of wins with three. Where the 1994 squad owned the top three at the end of the year, the new crew came close with a 1-2-4.  From afar, there was nothing but admiration for all that Power and his teammates achieved while trying to replicate Penske’s greatest season without the same kind of chassis advantage. “You know, with the way the cars are today, it’s extremely close,” Unser Jr. told RACER while driving home from a vintage race at Watkins Glen. “I mean, we had the Penske-built chassis, which I felt was the best car out there. And we as a team, with Emerson, P.T. and myself and the whole crew, we exploited that as much as we possibly could. Winning the 500 with the 209 cubic-inch engine, that was an effort all in itself, but that was just one win of the 12.  “The other 11 wins, it was with the same Ilmor engine that all the other teams had, so we didn’t have a full advantage with the engine. It was the car — Nigel Bennett did a great job designing the car. But it was a different era. I think today, it’s a lot harder to dominate like they did, which makes it such a big deal.” Another crossover between 1994 and 2022 for Team Penske is found in some of the shared venues where their wins took place. Newgarden won at Long Beach just as Unser won at Long Beach. Tracy and Power won at Detroit. Unser and McLaughlin won at Mid-Ohio, and they also won at Portland where, back in 1994, Penske’s drivers owned every step of the podium. The current squad came closest to repeating the feat at Detroit where they finished first, third and fourth.  The only item missing from Team Penske’s list of 2022 honors was a win at the Indy 500 which, in Unser’s estimation, doesn’t take away from all that Power, Newgarden, and McLaughlin produced. “If you were to ask me which one I want to win, the championship or the 500, I’ll tell you, the 500, for sure, but winning the national championship is a year’s worth of work,” he said. “And it’s not just the driver; it’s the entire team, working together, pulling together, especially when you have teammates. It takes everybody to achieve that championship, and you can’t have a sour teammate in there or else it can ruin your chances. “And then with Will Power, setting the record for poles, that in itself is a huge deal. All I had was eight poles in my career, and believe me, I wanted more but it just wasn’t there for me. I didn’t have that sheer speed that Will does in qualifying, and again, it’s incredible.” The last major point of connection between 1994 and 2022 is found with our champions. Unser clinched his first title in 1990 with Galles/Kraco Racing and scored another on his debut for Penske four years later.  For Power, his first arrived with Penske in 2014 and after a number of near hits, moved into a new category of respect and accomplishment eight years later with a second crown. From one two-time champion to another, Unser knows how much it means to join the club. “With me, you win once, it could be a fluke; you got lucky, that sort of thing,” he said. “But when you back it up with another win, OK, you prove that the first one was real. More than anything, all I really wanted was to prove that to myself and the racing world that my championship wasn’t a fluke, and I think Will’s probably looking at his the same way. You get that second, and there’s no question that you’re a true champion. That’s what Will is in my book.”