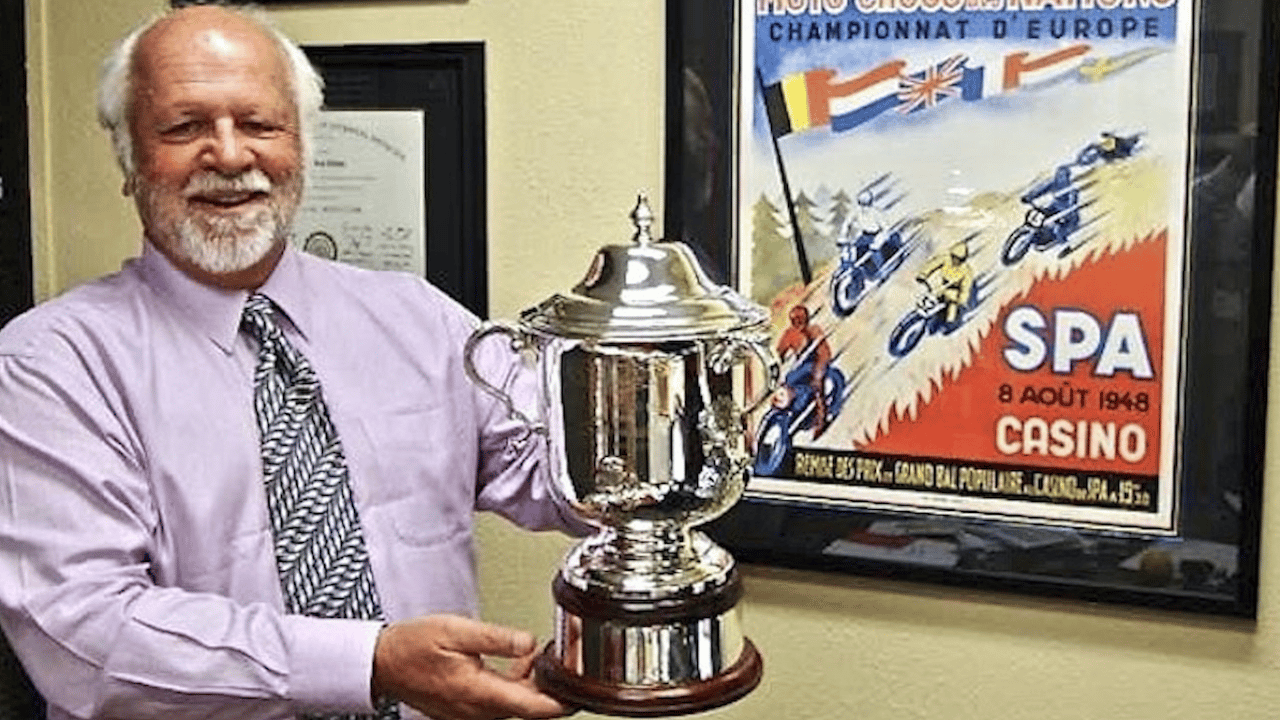 THE NEW RULES ARE DESIGNED TO RETURN TO THE ORIGINAL INTENT OF THE WORLD VET CUP OF NATIONS Glen Helen’s Bud Feldkamp is holding the perpetual World Vet Cup trophy that has the name of each winning county engraved on it. Glen Helen Raceway would like to thank everyone that participated in the 2022 World Vet Cup of Nations. It was a huge success and there were even tears of joy on the podium. This special race, designed to highlight all of the nations that are represented at the Dubya World Vet Motocross Championship requires three riders from the same country on each World Vet Cup team. Unfortunately, when the Covid-19 pandemic hit and the borders were closed around the world, the rules were loosened to allow a foreign-born, passport-holding rider to borrow available riders from other countries to fill out that his World Vet Cup team. It was an emergency procedure to keep the World Vet Cup going—it was never planned to become a permanent fixture. Glen Helen wants to World Vet Cup of Nations event to return to its original concept starting with the next year’s race. It is for proud riders from Ireland, Germany, France, Canada, Brazil, Mexico, Italy, Spain and the 15 other countries in attendance to represent their country…and fly their flag. The goal isn’t to write new rules for rules sake, but to return the Cup of Nations back the original rules to keep the international “spirit” of this race alive and to ensure it remains a prestigious race for many years to come. As the Over-30-year-old National team riders launch off the line, the Over-40 riders are ready to move into position for their start 30 seconds later, while the Over-50 riders hang back out of the roost. HERE ARE THE UPDATED RULES FOR THE 2023 WORLD VET CUP OF NATIONS (1) Passports or birth certificates: To be deemed a valid representative of a country, the rider must possess and present an official birth certificate or passport from the country being represented. The hope is to have teams made up of proud racers representing their nation—not ringers from America. (2) Filling a spot: All three riders should be from the nation they are representing, however, in special circumstances, a minimum of two riders on the team must meet the criteria of rule #1. If 1 of the riders is not from the country they are representing or cannot provide an official birth certificate or passport, there will be a 5-point penalty assessed to that rider’s overall finish points for each moto. (3) Scoring system: World Vet Cup racing consists of two motos, The first moto is on Saturday and the second moto is on Sunday. Points are scored based on the finishing positions within each age group. A country whose team finished 1st in the 30+, 1st in the 40+ and 1st in the 50+ would have a team total of 3 points for that day’s motos. The national team with the lowest score for both days combined will be the overall World Vet Cup of Nations Championship team. (4) Class ages: Each national team will consist of three riders who meet the age requirements to participate in the 30+, 40+, and 50+ classes. Any rider over 30 years of age can fill the 30+ spot on the team. Only riders 40-and-over can fill the 40+ spot on the team and only riders over 50 can fill the 50+ spot on the team. Paradoxically, riders over 50 can fill spots in the Over-30, Over-40 and Over-50 classes. The race bibs come in different colors for each age group and each age group starts the World Vet Cup motos in its own wave off the start (5) Race bib mandate. National race bibs, with that nations flag on it, will be provided to each rider of the country being represented. Failure to wear your bib will result in a 5-point penalty for your team. It is best to start forming your national team as soon as possible, with back-up riders if necessary. Each nation is allowed to field as many as three separate teams! The World Vet Cup of Nation application forms will be made available in June of 2023. Glen Helen is announcing the rule change now, so that foreign riders have time to find the best possible 30-, 40- and 50-year old riders for their national team before  the 2023 World Vet Championship. Don’t delay.       The post 2023 WORLD VET CUP OF NATIONS RULES UPDATE appeared first on Motocross Action Magazine.