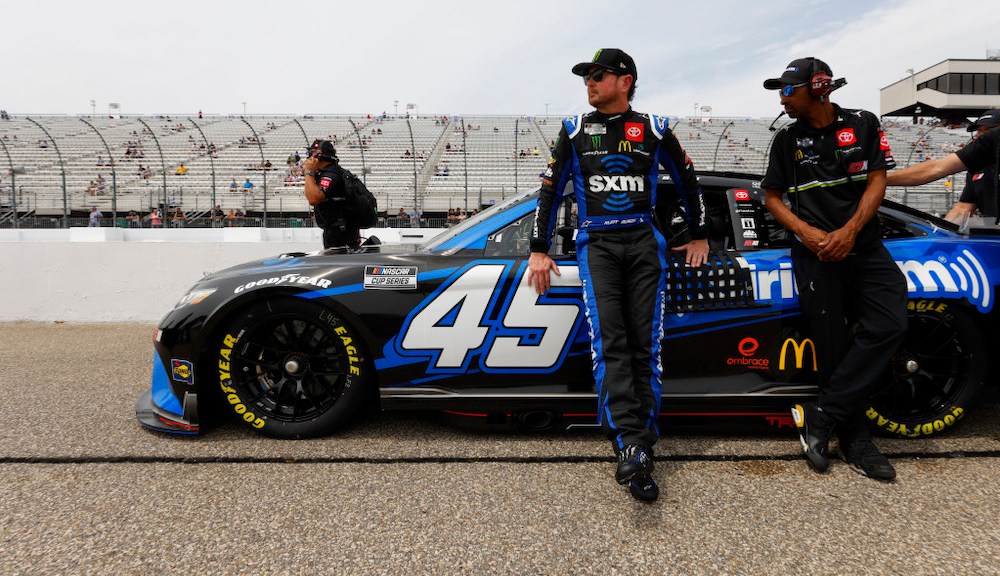 Denny Hamlin and 23XI Racing believe Kurt Busch will return next season and if he does, the No. 45 Toyota will be waiting for him. Busch has been sidelined since June with concussion-like symptoms from a qualifying crash at Pocono Raceway. While Ty Gibbs has been Busch’s substitute since then, Gibbs is expected to replace Kyle Busch at Joe Gibbs Racing next season now that the latter Busch’s future is set. Busch is headed to Richard Childress Racing, where he will replace Tyler Reddick in the No. 8 Chevrolet. However, these deals are intertwined, as Reddick is signed with 23XI Racing beginning in 2024. With Busch sidelined and the continued tension between Reddick and Childress evident, questions have arisen about whether Reddick could head to Hamlin and Michael Jordan’s team a year early. 23XI and Toyota are currently staying out of the Reddick/Childress fray. Instead, Hamlin is focused on letting Busch recover while also being well aware of the fluid situation around his car. “We still feel like Kurt’s going to run next year if he doesn’t, we’ve already got contingency plans for the 45 car,” Hamlin said. “If was pushed to the side I think we would take him, but I don’t know that we need really get into pushing to get him early. “I think that Tyler’s said – and I believe it – that he wants to live out his contract at RCR. Mostly he wanted to do it for his team and his guys. With him being taken out of the 8 car, I don’t know if that changes. But I know Tyler wanted to end what he started there. As you saw, he’s still giving that team a ton of success. So, I think the most likely scenario is RCR has a really strong lineup next year, with three guys that all could win races.” It is not as simple as wanting Reddick and putting him in a car. Reddick’s contract at Childress would need to be bought out, either by Childress or 23XI. Neither is making a move right now, with Childress saying earlier this week during the Busch announcement that he’ll have a third car for Reddick next season, but it won’t be the one he’s currently in that’s contending for the Cup Series championship. “One thing we’ve seen over the last couple of months is Tyler Reddick has continued to be a professional,” Hamlin said. “He’s given his team 110%. That’s something he always said. And I know conversations I had with other people, that they had no question he was going to give 110%, even after the announcement, for his race team, for his manufacturer. “I think he’s delivered on that. No matter the circumstances getting thrown at him, I’m very certain that he’s going to maintain that level of professionalism and take it in stride.” There have been no updates on Kurt Busch’s status since it was announced late last month that he would miss the start of the playoffs. Bristol Motor Speedway (Saturday, 7:30 p.m. ET) wraps up the first round, and there have been no indications Busch will be back to begin the Round of 12 next weekend at Texas Motor Speedway. Hamlin and 23XI Racing are also not giving him any deadlines for when a decision needs to be made about his immediate future or going into next season. “We’ve never wanted to push Kurt to any sort of decision whatsoever, which is why we’ve been patient with him even this year,” said Hamlin. “Obviously, the opportunity is always open for him to come back anytime he wants. We have Kurt under contract this year, next year and an optional third year. “I think it’s important for us to make sure Kurt has the opportunity to come back whenever he wants. Situations may change around the race team shouldn’t affect our commitment to Kurt whatsoever. I want to make sure he always has that opportunity, and we don’t fill a spot that ultimately, he is likely to come back to.”