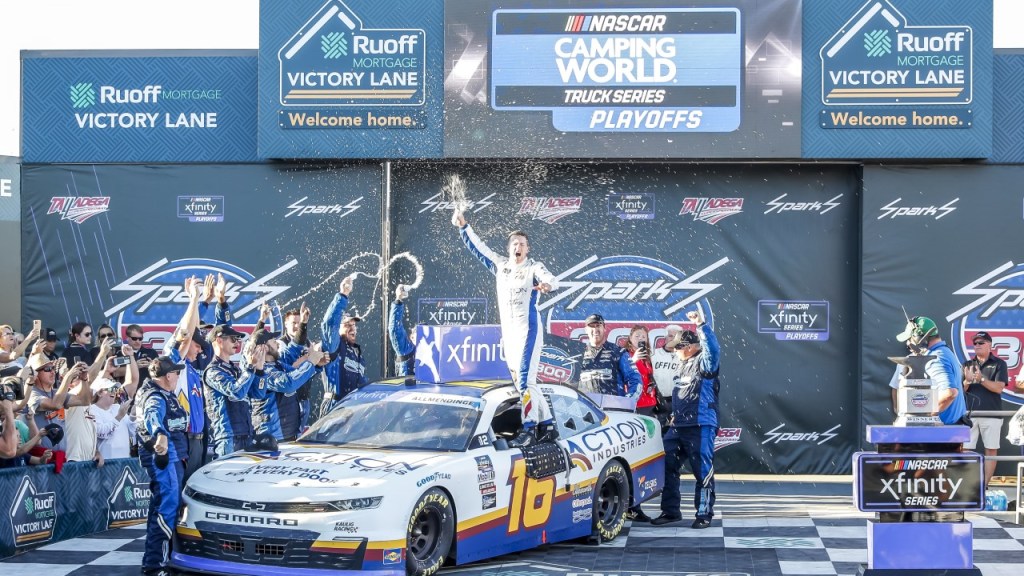 Three times A.J. Allmendinger has led at the white flag on a superspeedway and not been able to lead the next lap to earn the big trophy. On Saturday, the veteran waited and pulled ahead of the field in the final feet coming to the Sparks 300 checkered flag at Talladega Superspeedway and edged 19-year old Sam Mayer by 0.015s – about three feet — in a photo finish to earn his first NASCAR Xfinity Series win at NASCAR’s biggest track. It marked the regular season champ Allmendinger’s fourth victory in the No. 16 Kaulig Racing Chevrolet this season and first ever at a superspeedway. Most importantly, the win — coming in the second race of the opening round of the Playoffs — is an automatic ticket through to the next round of Xfinity Series Playoff competition. “Let’s gooooooo,” an absolutely elated Allmendinger screamed into the grandstands after climbing out of his car and accepting the checkered flag at the iconic track. “Gosh, we’ve been so close to winning one and I feel like I keep giving them away. Thought I might have given it away. I’m still learning, trying to know what too big of a lead is. But honestly, all credit to Landon Cassill. “He kept shoving me. He stuck with me. That’s what is great about Kaulig Racing — when you have teammates like Landon and Daniel that you know wherever you go, they’ll go with you. So thank you Landon. “Man, I just wanted to win a superspeedway and finally got it,” added a grinning Allmendinger, who now claims 14 career Xfinity Series victories. Cassill finished third, followed by Ryan Sieg and JR Motorsports driver Josh Berry – all Playoff contenders. Parker Kligerman was sixth, followed by Playoff drivers Ty Gibbs, Daniel Hemric, Brandon Jones and Noah Gragson. It marked quite the comeback for Gibbs, who qualified on the front row, but was involved in the only on-track yellow flag for an incident on the afternoon. The Joe Gibbs Racing driver’s No. 54 Toyota was tagged from behind by Justin Allgaier while racing in a tight pack up front only three laps into the 113-lap race. Gibbs spun out but was remarkably untouched by any other car. A quick pit stop and impressive pit strategy later, Gibbs was running around the top-10 in the closing laps of the race and managed to recover to that seventh place final effort. Gragson, driver of the No. 9 JR Motorsports Chevrolet, was looking to become the first driver in NASCAR Xfinity Series history to win five consecutive races and was running among the top-3 with 10 laps to go. His ultimate move forward for the win in the closing laps was blocked and he instead finished 10th. Although just short of that historic victory nod, he had already earned his automatic ticket to the Playoffs second round by virtue of his victory last week at Texas (his seventh on the season and fourth in a row). “We’re going to keep it going,” Gragson said after the race. “I have a super motivated team. You want to win them all, but you can’t do that sometimes.” Polesitter and series rookie Austin Hill, who swept the two stage wins and for the second straight race led the most laps – 60 on Saturday – also dropped out of the lead group in the waning laps to the checkered flag. He finished 14th. With Allmendinger and Gragson having earned automatic bids in ton the next round of the Playoffs, Gibbs (-21) and Hill (-27) are ranked third and fourth in the standings, followed by Berry, Allgaier — who finished 15th Saturday – Mayer and Sieg in that eighth and final transfer position. Defending series champion Hemric (-6), Brandon Jones (-10), Riley Herbst (-10) and Jeremy Clements (-47) are ranked ninth through 12th heading into the final race of this Playoff round. Up next is the Drive for the Cure 250 presented by BlueCross BlueShield of North Carolina on Saturday at the Charlotte Roval (3 p.m. ET, NBC, PRN, SiriusXM NASCAR Radio). A.J. Allmendinger has won the last three Roval races. RESULTS

Previewing the biggest driver moves for the 2023 NASCAR Cup season