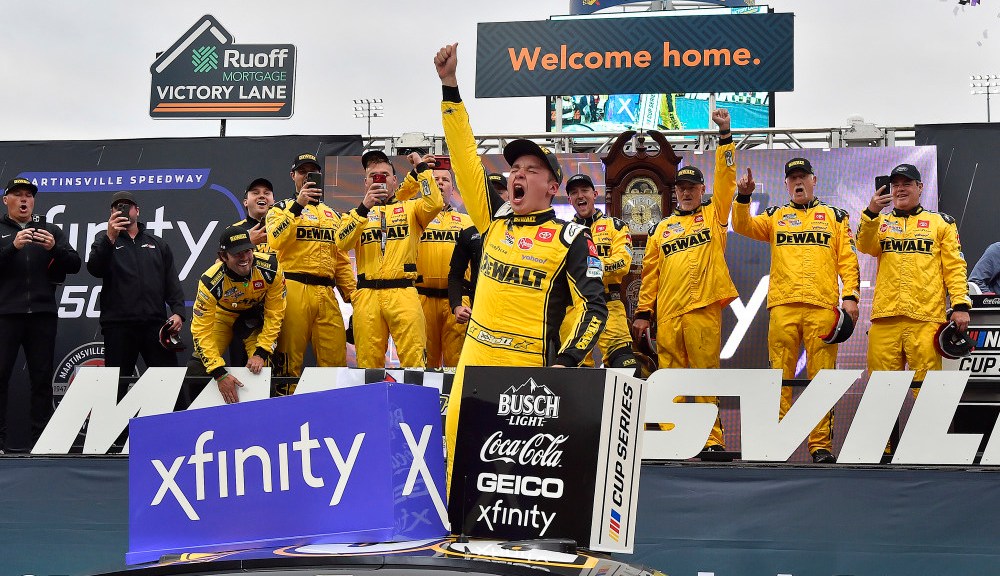 Christopher Bell had the odds stacked against him twice in the NASCAR Cup Series playoffs, and he rose to the occasion twice. Bell will compete for the NASCAR Cup Series championship Sunday at Phoenix Raceway (3 p.m. ET, NBC) after winning his way into the Championship 4, although his Martinsville Speedway walk-off has been far more overshadowed — thanks to Ross Chastain — than his walk-off win three weeks earlier at the Charlotte Roval. The Roval win put Bell into the Round of 8. Bell’s team owner, Joe Gibbs, recognized that the odds weren’t in Bell’s favor. And certainly not with the lineup of racetracks Bell had to conquer. “In our first (round), I think he had the most points,” said Gibbs. “So, we felt really good going into the next (round), and there we lost tires twice in Dallas and just put ourselves at the bottom. So, you’re looking at that, and anytime anybody gets in that situation, a must-win, and you’ve got all the guys competing the way they’re competing at the end of the year, and everybody is fighting for a chance to advance in the next round, you always have to say to yourself — any fan or all of us in racing — it’s going to be really, really hard.” Bell averaged a 4.0 finish in the first round of the playoffs. Tire issues at Texas Motor Speedway knocked him out of the race and to the bottom of the playoff grid. Not scoring many points at Talladega (20) sent Bell to the Roval knowing that he needed to win. “We were able to win at the Roval — which for us, if you’d picked a racetrack that would have been hard for us to have a victory like that, it’d be the Roval,” noted Gibbs. “Then we come back and have the wreck situation that put us to the bottom again. To think you could come back twice from being in that situation, I don’t think anybody thought that would be possible.” The wreck was at Las Vegas, the first race of the third round. Bell was an innocent victim collected in the dust-up between Toyota teammate Bubba Wallace and Kyle Larson. It again put him in the playoff hole. Bell rode the roller coaster of the playoffs as well as he could. Unfortunate racing circumstances kept knocking the No. 20 team down when Bell kept saying they were fast enough and capable enough of competing for a championship. Bell was down in the dumps before the Roval, back up afterward, and then depressed again before coming through again at Martinsville. “What I saw in that was Christopher and the way he embraced it and went after it,” Gibbs said of Bell’s playoff run. “The way Adam (Stevens, crew chief) and our entire team over there, our pit crew, everybody that works on that car … I think everybody hung tough. Christopher, for him to be able to win Sunday was just a fantastic effort by everybody. “We had great pit stops at the end (and) got him up there where he had a great chance with Adam making the call to get tires, and then it was a matter of him doing the job and fighting through five other cars, which he was able to do.” Sunday will be the first time Bell has competed in the championship race on the Cup Series side. With obvious humor, Gibbs gives his driver a one-in-four chance of winning the title. “It’s extremely tough,” said Gibbs. “When you get to this and think about who sitting there that he’s going to have to race against, those three other competitors from great organizations, I think it’s going to be extremely hard. I think the way our playoffs are designed, it does bring a lot of attention to it, every three races dropping out four cars. Now we’re down to just four, and I think the fans love this format and the way it’s designed. “It brings a lot of pressure into the situation. One of the things we love about sports and one of the things we love about pro sports, is it’s so hard, and it’s the greatest reality show in the world. We don’t know (what’s going to happen). We’re going to go to Phoenix, and there’s going to be four great organizations, drivers, competing with their crew chiefs and their teams, and their pit crews, and I think it’s going to be just a great weekend for us.”