Blaney 'too little, too late' to win Talladega 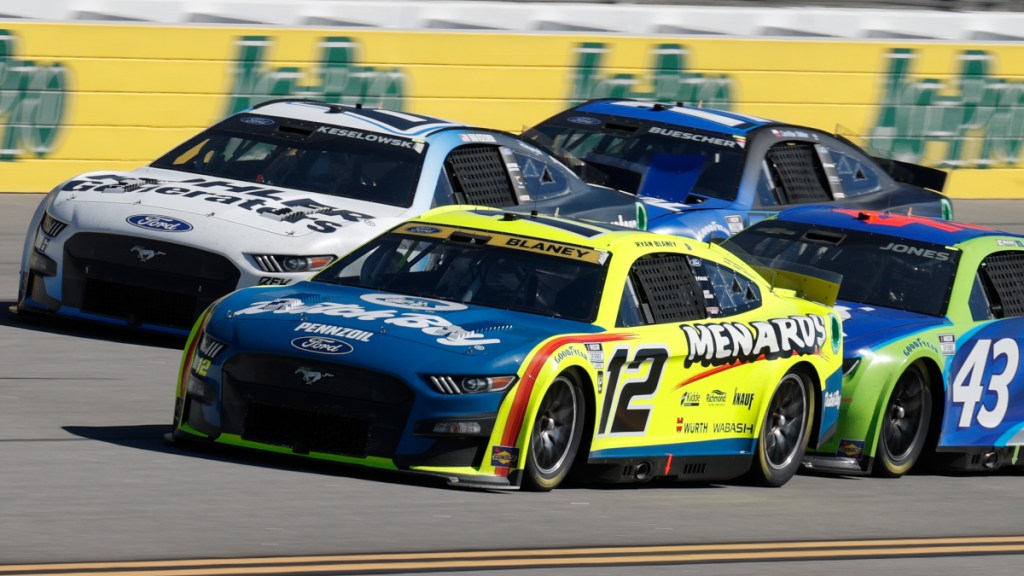 Ryan Blaney will go back and watch the end of Sunday’s race at Talladega Superspeedway and probably find a few things that could have turned his second-place finish into a win. Overall, the Team Penske driver wasn’t all that upset about coming up short. Blaney won the first stage of the YellaWood 500 and came home with his Ford Mustang in one piece to keep him in position to advance in the NASCAR Cup Series playoffs. Blaney led the inside lane with help from Ford teammate Michael McDowell and Denny Hamlin. Chase Elliott led the outside lane with a push from Erik Jones and Ross Chastain. At a dead heat going into Turn 3, Blaney had a brief advantage thanks to McDowell, but he and Elliott were side-by-side coming through the tri-oval. A surge of momentum with the help of Jones gave Elliott the lead for good. Blaney’s last-ditch effort to jump to the outside wasn’t enough to get by Elliott at the line with the margin of victory being 0.04s. “I got a good push and was able to get too good of a push on the restart that got the…No. 9 clear, and then he was able to lead the top lane,” Blaney explained. “I had a couple chances to move up to the top and cover it, and I was just nervous about getting hung in the middle with the No. 9, the No. 43, the No. 1 lined up. I just didn’t feel comfortable going up there. I trust Chase but not that much where he wouldn’t hang me out for the great good of his move. “I just chose to stay on the bottom with Michael . I had a great chance of winning the thing but just got disconnected in the middle of Turns 3 and 4. I don’t know if the No. 11 laid off the No. 34, and we kind of disconnected and let the No. 9 and No. 43 get a big run, and I was kind of too late. I’ll look at it and probably pick out a few things that I probably should have done different, wish I would have done different. But it’s easy to say that now. Just overall, a decent day — just stinks to be that close to the…first win of the season.” Things developed too quickly in the moment for Blaney to do what he thinks he could have done differently. The first thing was realizing that Hamlin was laying off McDowell, which would have given Blaney the chance to fade back with them in hopes of getting a run. “If it would have won me or not, I don’t know,” Blaney said. “ do the fake high, go low, but he was watching, and I was kind of too far back. I think it was going to be too little, too late anyway.” Blaney led 31 laps. The stage win nabbed him 10 bonus points, although he failed to grab any in the second stage. He is 32 points above the cutline going into the final race of the round. Admittedly, the bigger picture of having a good points day was on Blaney’s mind going into the race’s final restart with two laps to go, but then the race car side of him prevailed. “I had that thought…before the restart and then we green and you want to turn into race-win mode,” he said. “So for a moment, I was like, yeah, it would be good to line up on the front row and see what we can get. I just didn’t want to get wrecked. I don’t want to get turned. But I forgot all about that; I just wanted to win the race.”