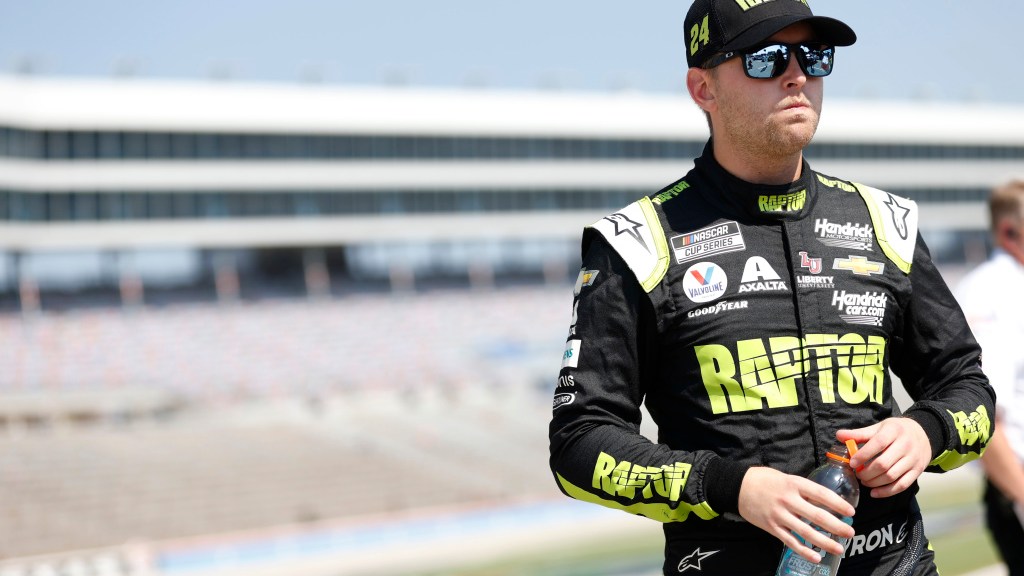 William Byron seemed prepared to be penalized for his contact with Denny Hamlin last weekend at Texas Motor Speedway, but not how he was. NASCAR docked Byron and Hendrick Motorsports 25 points and fined the driver $50,000. Byron, upset with hitting the wall earlier when racing Hamlin, hit Hamlin square in the back off Turn 4 under caution. The contact sent Hamlin spinning through the frontstretch grass. “I guess I felt like it was a little bit different than what I expected, but I’ll let the appeal process kind of take care of that,” Byron said Saturday at Talladega Superspeedway. “We accept it for this weekend and move on and look at it as any other weekend. We’ve done our prep and feel like we obviously know where we stand based on that, so just kind of approach it that way.” Hendrick Motorsports is appealing the penalty. Team president and general manager Jeff Andrews didn’t go into detail about their appeal’s basis. “I think, out of respect for the process that we’re going to go through next week, I don’t really want to get into too many specifics,” Andrews said. “But there is a different perspective that we have on what happened and what the intent of that was meant to be.” Byron said he’s been helping the team prepare for their appeal hearing. It will take place next week before the final race in the Round of 12 at the Charlotte Roval. “We kind of compiled our list of evidence and got quite a few videos and things to look at and information that we’ve put together,” said Byron. “I feel pretty good about that end; willing to help any way I can. I feel like I’ve tried to help in some ways, just try to get all the evidence kind of put together. But yeah, I feel good about that end of things. “Like I said, this weekend we just have to go get stage points, try to go win the races. There are worse places to do it. We’ve had good results here and good results on the superspeedways in general.” NASCAR senior vice president of competition Scott Miller admitted officials missed the incident in live time. The No. 48 was not penalized during the race, and Hamlin was placed where he blended back into the field, losing his track position as he’d been running second. The penalty was not issued until Tuesday after NASCAR reviewed the incident. “It’s a little bit weird,” Byron said. “I don’t know if I’ve seen that before, but we just take what we’re given, and we’re glad to be on this stage, glad to be in the playoffs, still have an opportunity to there and win the next two weeks. We’re not really that far out, but, with the severity of the penalty, that’s what we’re opposed to, and that’s what the appeal is about — the severity of that. “It’s really similar to a full season points penalty, not something that’s a three-race round, three-race stretch that every point matters. I think that’s the biggest difference. It’s three races. Twenty-five points is a lot. Depending on how your race goes that is pretty severe.” Byron dropped from third to 10th on the playoff grid and eight points below a transfer spot. The appeal is pending. The best case is it gets overturned, but Byron isn’t going to race that way at Talladega. “I race eight behind. I don’t think about the hypotheticals. Obviously, I think we’ve got a good case and a good amount of evidence that we’ve put together, but I race like it’s there and like it happened. Just move forward with it. Go after the stage points and feel like we’re capable of running really well at superspeedways; I’ve had a couple wins on superspeedway type tracks, so feel good about that.” As for going forward with Hamlin, he didn’t seem concerned. “We had a good conversation a couple of days ago and we’ve never had issues, so I’m not thinking about Denny or his team,” Byron said. “I’m thinking about our team and what we can do going forward. It was a good conversation. Learned a lot from him and got a better understanding of what he was thinking.”