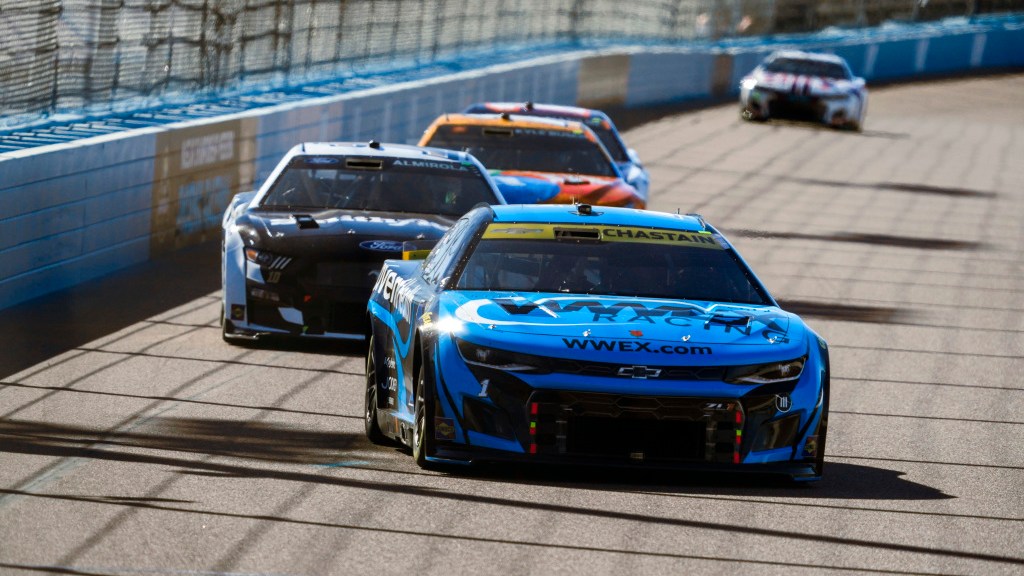 Ross Chastain left Phoenix Raceway one spot short in the NASCAR Cup Series championship fight but with his head held high and full of grateful emotion. “I’m not sad. I’m not upset,” Chastain said after finishing third in the race behind Team Penske drivers Joey Logano and Ryan Blaney. “I honestly thought when we started the playoffs that…if I lost by a little bit, that I would be really upset, and I’m not. I’m so proud and so happy to give our first shot at these playoffs and at racing in the Cup Series with Trackhouse, and we just ran second.” He said Logano and the No. 22 team had the playoff contenders covered all afternoon. It left Chastain and the others trying to catch Logano all afternoon after the Penske driver started from the pole and led a race-high 187 of 312 laps. Off the race’s final restart with 33 laps to go, Chastain went from seventh to third but wound up over a second behind at the finish. It was the highest he had run all afternoon. “But we didn’t have the balance in our car and the grip in our car all day to be that way,” Chastain said. “I’m proud of the effort. Nobody got upset, nobody got flustered, and we just kept working on our car all day.” Despite starting 25th and having a steep hill to climb in a track position race, he said he never felt his No. 1 team was out of contention. It was more of a fight to get his Chevrolet handling the way Chastain needed it to so he could compete. “On the final pit stop, we got it right, fired off the best…we made to the end there, and that was the best we were,” said Chastain. “That’s what makes me so happy is we can just keep fighting, and no one is ever upset. We keep our world small; we all do our jobs. Everybody at Trackhouse just put forth their best effort throughout the season, and we ended as strong as I’ve ever seen us. “Everybody stepped it up in the sport, in the playoffs here at the end, and we did the same thing. I’m proud of that.” The only blemish of the day, if one considers it that, was making contact with fellow Cup Series championship contender Chase Elliott. The incident happened on lap 200 when the field took the green flag on a restart and Chastain made a move to the inside in the frontstretch dog leg. The No. 1 and No. 9 collided, which sent Elliott for a spin, hitting the inside wall, knocked out of title contention. The two had no issues for the remainder of the day. “I felt like I got position on him to the left side…” said Chastain, “And he turned left.” Going forward, Chastain vowed to rely on those around him to continue to mold him into the best race car driver he can be. “There are so many things that I can do better,” he said. “There are so many things that I can clean up that would make lap time, first of all. It would clean up running position throughout the race and, ultimately, finishing position week in and week out. “I want to be coachable. I want to be the best, and I believe that the path there isn’t always what I want. I’m not always going to like what they want me to do. I’m not always going to enjoy the moments. But it’s going to be for the better, and I believe I have the best group to do that.”