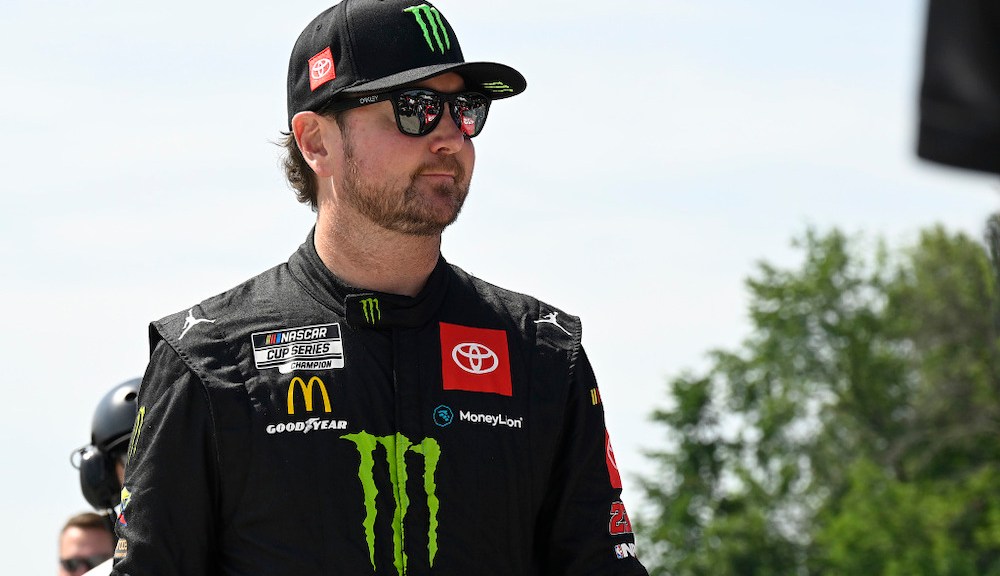 Kurt Busch does not have an update on when he might return to NASCAR Cup Series competition, but said on Tuesday that each week is a step forward. “I’m doing good,” Busch said at Charlotte Motor Speedway during the Paint the Pit Wall Pink event. “Each week is better progress and I feel good. I don’t know when I’ll be back, but time has been the challenge. Father Time is the one in charge on this one.” Busch participated in Tuesday’s event with a group of breast cancer survivors and Blue Cross Blue Shield representatives. The 23XI Racing driver is the one who set the ball rolling for all NASCAR Cup Series drivers to use pink window nets to raise awareness for breast cancer during the Charlotte Roval weekend after receiving the idea in a fan letter. But the 2004 series champion will not compete in this year’s Roval race and has not competed since July. Busch was sidelined with concussion-like symptoms following a qualifying crash at Pocono Raceway when his Toyota spun and backed into the wall before snapping around and hitting with the front end. “I feel hopeful,” Busch said of racing again soon. “I know that I have more doctor visits and more distance to go, and I keep pushing each week. TPC, Toyota Performance Center, has been a group of angels that have helped me with the workouts and the vestibular workouts. Different nutrition as well. Different supplements and things to help everything rebalance with my vision, my hearing, and just overall balance in general.” Ty Gibbs has driven Busch’s car in his absence, and there have been a handful of social media updates from Busch during that time about his recovery. In his most recent post before the playoffs started, Busch expressed continuing to need time to strengthen his body. Tuesday was the first time Busch has spoken to reporters since the Pocono crash, but it was not the first time he’s been out to an event. He went to the Field of Dreams baseball game that his Cubs played in, has also been to a few soccer games, and recently a rodeo event with Monster Energy. “It’s good to be out in busy environments and really to support the ladies here and the whole Drive to the Cure 250,” Busch said. “Marcus Smith and everybody at NASCAR has blessed the pink window nets, so of course, I’ll be here to support this.” As to the severity of his injury, Busch admitted he doesn’t know why his crash left him in such a state. “It’s similar to a breast cancer survivor; not every story is the same,” said Busch. “Not every injury is the same. There’s been a bunch of military guys that have reached out to me from all the years that I’ve worked with their different foundations, and you feel that village and support. So it’s not like a broken arm and you have your cast taken off and you can go bench press 300 pounds. It’s a process of coming back.” Busch is still learning about himself and his injury as the healing process continues. “It brought me back to my beginning days of, this is something I never knew would happen as far as an injury,” he said. “I never knew I would make it in racing, and you keep pushing based off of our instincts and the village of people around you. “Whether it’s been the race team – 23XI has been tremendous, Toyota, Monster Energy. It reminds me of the beginning of, I don’t know what journey I’m on, but I’m going to keep pushing.”