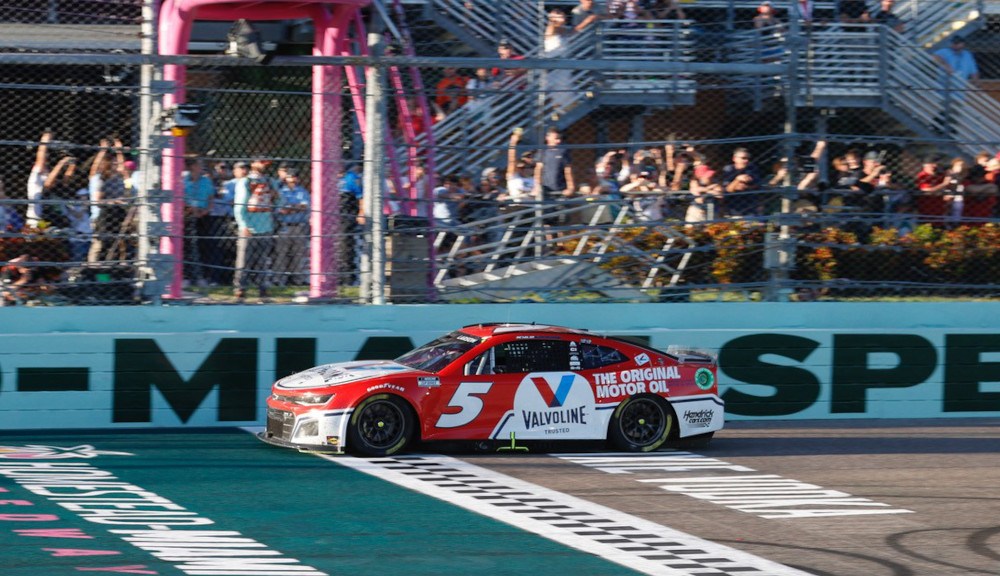 Kyle Larson and the No. 5 Hendrick Motorsports team put together a mistake-free day Sunday at Homestead-Miami and whipped the NASCAR Cup Series field to the victory in the Dixie Vodka 400. Larson led 199 of 267 laps and swept all three stages. He led the final 22 laps after taking the lead for the final time off pit road following the last round of stops. The No. 5 team got Larson off pit road first over Denny Hamlin while Martin Truex Jr., who had been leading, was spun into his pit stall by Larson. Truex noticed his pit stall late and wasn’t pulled to the left to begin turning in. Larson wasn’t expecting Truex to slow in front of him. “I was just going behind him, and he had a hard left and was hard on the brakes at the same time, and I ran right into the back of him,” Larson said of the contact. “My team said he was late turning into his stall, but if it was my fault, I’m sorry. I don’t think it was, but it’s hard to see on this pit road. I don’t know if fans and people realize when you’ve got debris all over your windshield, the sun shining straight in your face, it’s hard to see your stall, so I hate that (it happened). He was definitely the one I was going to have to beat. He was really good that last long run too. “What a fun day,” he continued. “I’ve always wanted to race here during the day at Homestead. We could rip the wall and we finally have a car tough enough for me to be able to run the wall and finish the race. A lot of fun today. I hope we can do it again in a couple of weeks.” On the final restart with 17 laps to go, Larson didn’t initially drive away from Ross Chastain and AJ Allmendinger, but when the pair started to do battle for the runner-up spot, Larson cruised to the win. Chastain and Allmendinger finished second and third, respectively. Austin Dillon finished fourth and Brad Keselowski finished fifth. Two cautions in the final stage changed the complexion of the race. The first came during a round of green-flag pit stops on lap 211 when Ryan Blaney spun on the access road after completing his stop. Larson was still on track and pitted under caution, while Truex and Chastain had already made their stops and inherited the top two spots. Truex had nearly 2s on Larson when the final caution flew with 23 laps to go and sent the field to pit road for the last time, leading to Truex’s spin. He led 28 laps on the day and restarted 19th after his pit road woe, ultimately charging to a sixth-place finish. Denny Hamlin finished seventh, Kevin Harvick eighth, Kyle Busch ninth and Daniel Suarez 10th. Christopher Bell finished 11th and William Byron finished 12th after starting from the pole. Byron appeared to be the best playoff driver through the first two stages before fading with an ill-handling car. Chase Elliott finished 14th, Blaney 17th and Joey Logano 18th. Chase Briscoe was the worst-finishing playoff driver in last after crashing out on lap 161. There are three spots in the championship race still up for grabs after Sunday’s race, as Larson is no longer championship-eligible after being eliminated in the last round. Sunday was Larson’s third win of the season and first at Homestead. “It was definitely the best run we’ve had all year long,” Larson said. “We’ve been capable of it; I feel like many weekends, we just haven’t put it all together. Cliff gave a great speech this morning and got us all ready to go and focused, and did my best to keep it out of the wall. I got into the wall a few times, but I could still make speed doing that. Amazing race car. I knew that last run was going to be short enough where I was going to be in some trouble there, but thankfully AJ and Ross were racing hard behind me. “Happy for our team,” the California native said. “We get to go race for an owner’s title in Phoenix in a couple of weeks. So, we’re still technically not out of it. I know I can’t win the championship, but it means more to me to win it as a team, so we’re going to go to Phoenix and try to get another championship.” There were five caution flags throughout the afternoon. Larson was one of five leaders and 11 lead changes. He is the fifth non-playoff driver to win one of the eight playoff races so far. RESULTS