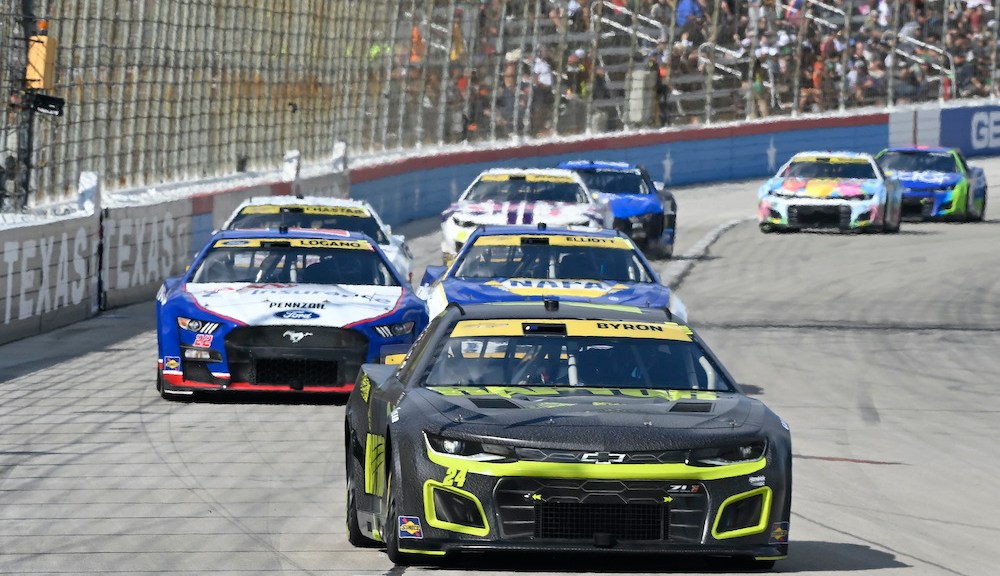 William Byron and Ty Gibbs have both been fined and docked championship points for their respective actions Sunday night at Texas Motor Speedway in the NASCAR Cup Series race. Byron has been fined $50,000 and docked 25 driver and owner points for spinning Denny Hamlin under caution. The Hendrick Motorsports driver was upset with Hamlin for having earlier raced him tight off Turn 2, which resulted in Byron hitting the wall. When the caution came out with 73 laps to go, Byron, running third, didn’t slow down off Turn 4 and ran straight into the back of Hamlin. Hamlin was running second and spun through the grass and lost his track position as NASCAR officials did not give him his spot back. Byron was not penalized during the race. He admitted afterward he was “pissed off,” but insisted that spinning Hamlin was unintentional. The driver points deduction drops Byron out of the third position on the Cup Series playoff grid with a 17-point advantage on the cutline to 10th. Byron is now 10th in the playoff grid standings and eight points below a transfer spot going into Talladega Superspeedway (Sunday, 2 p.m. ET, NBC). Gibbs was fined $75,000 for door-slamming Ty Dillon on pit road. Dillon had pulled out of his pit stall and into the path of Gibbs, the two making contact. In response, Gibbs swerved to the left and slammed into the side of Dillon’s car. Additionally, 23XI Racing has been docked 25 owner points. On its penalty report, NASCAR noted, “retaliatory vehicle contact on pit road with crew members/officials in close proximity; second offense.” Gibbs has been substituting for the injured Kurt Busch since July. The penalty does not affect his standing in the Xfinity Series, where he is a full-time championship contender.