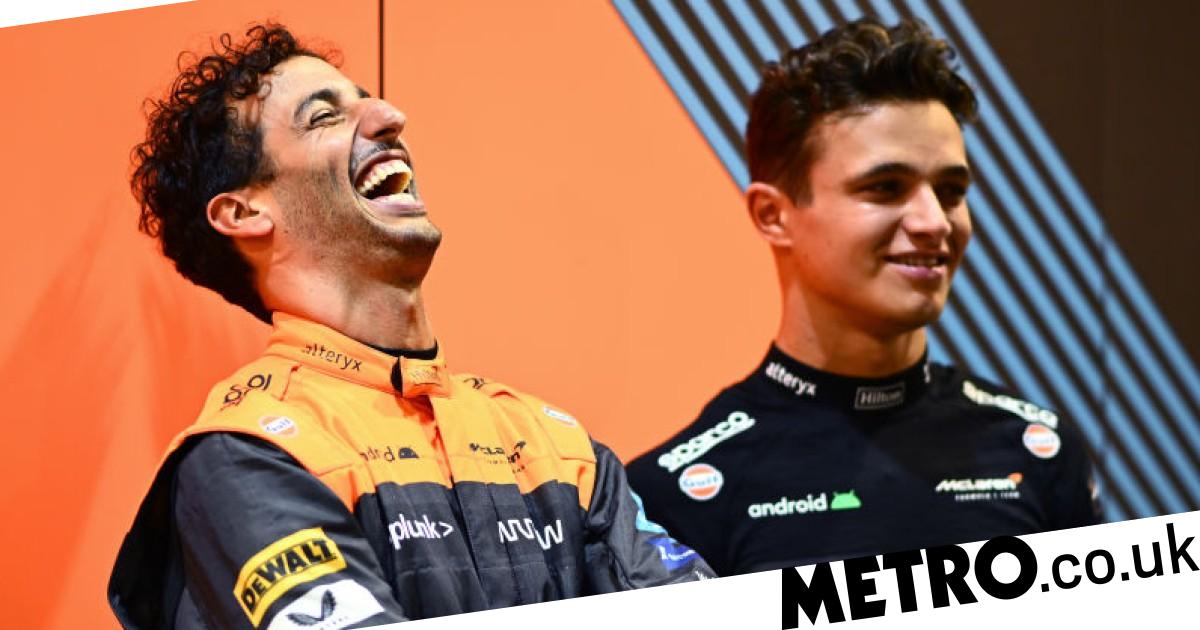 Lando Norris and Daniel Ricciardo both admitted they were too exhausted to celebrate McLaren’s best result of the season at the Singapore Grand Prix.

The duo finished fourth and fifth at Sunday’s eventful race which was won by Red Bull’s Sergio Perez.

The Marina Bay Street Circuit is notoriously tricky thanks to its tight and bumpy layout and the punishing humidity, but conditions were made even worse after a heavy downpour just before the race start left the track soaking wet for much of the grand prix.

While many drivers and cars fell victim to the conditions, Norris and Ricciardo kept calm and collected throughout and thanks to great strategy calls from the team, and a dash of luck, they recorded McLaren’s best result since their 1-2 in Italy last year.

‘We needed this, and as much as I’m looking forward to Japan, I want to enjoy this one,’ said Ricciardo post-race.

‘Finally, everyone is in good spirits. But I’m definitely too tired to party so I’ll just have a little drink here with the team and celebrate what’s been a good day.

‘I certainly feel good – it’s been a long time. My last top five was a year ago in Saudi Arabia so yeah, I hadn’t had one this year, which is kind of sad, but we know the year it’s been, and I feel like I was certainly due some good fortune.’

The 22 points from Singapore has seen McLaren move ahead of rivals Alpine in the battle for fourth in the standings, after both their drivers retired from the race with mechanical issues.

Ricciardo has jumped up the table to 11th, while Norris now has a sizeable lead of Esteban Ocon and Fernando Alonso in the race for ‘best of the rest’.

‘This was by far the hardest race, probably of my whole career,’ the 22-year-old British driver, who also had a couple of near misses with champion-elect Max Verstappen, said.

‘Not because I had to hold off too many people but just the level of concentration you need from lap 1 to the end.

‘Fair play to him, he [Ricciardo] has done a great job, we maximised today. Literally could not have done any better. So, great job by everyone, by the whole strategy team as well.

‘Maximised today especially when others had some troubles. Happy, great weekend – not an easy one. It felt like one of our worst to begin with but ending up almost being one of our best of the year.

‘The pace was good, I feel like I drove a very good race and smart race today, and it paid off for both myself and for Daniel too. Fourth and fifth was much higher than [our] expectation.’

MORE : F1 budget cap: Why could Red Bull and Max Verstappen be disqualified?

Alonso: Making success of F1 comeback not to be underestimated