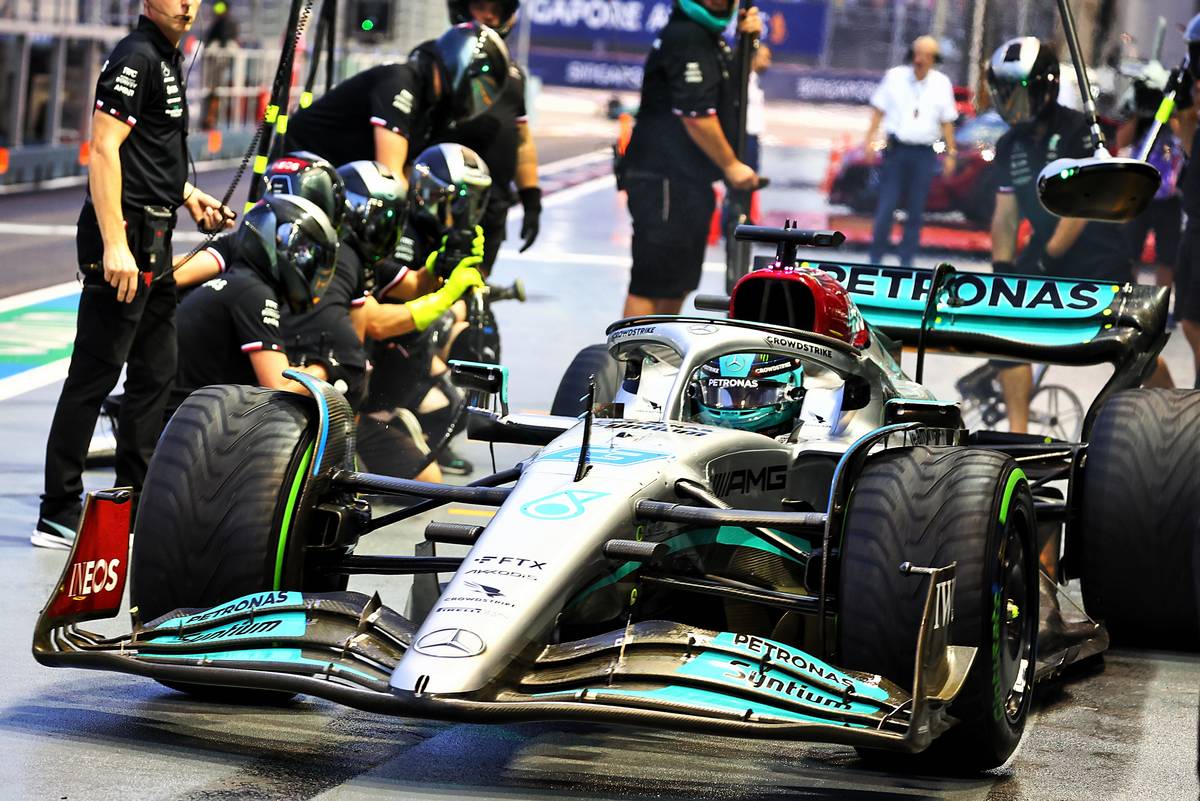 George Russell has been nicknamed 'Mr Consistency' for his track record of finishing in the top five this season since joining Mercedes, but it's not always gone so well for him in qualifying. This weekend saw him miss out on the final top ten pole shoot-out in qualifying for the third time. He'll start the Singapore Grand Prix from 11th on the grid after missing the cut at the end of Q2 by 0.006s. "George had braking issues with his car," said team principal Toto Wolff after the session. "Unfortunately he didn't have the right equipment to fight for a top position and we need to find out what the cause is." Read also: Leclerc on Singapore pole after Verstappen aborts final lap in qualifying "I had a recurring issue that we faced in FP1 where I felt like every time I got to the corner, I was kind of like picking up the throttle and the car was just totally pushing on," Russell explained. “I just couldn’t get around any of the slow speed corners," he said. "It was literally like someone trying to push me from behind, so that was a real shame." Although the team tried to get to the bottom of the problem overnight, Russell found the same thing happening again on Saturday. “It was there from the very first lap in qualifying, but it just got progressively worse," he declared. “I don’t know what the issue is, but we were nowhere," he sighed. "Everytime I got to the corner, it was like I just completely let go of the brake and I was just going straight on everywhere. I just couldn’t make it round every corner. "It wasn't anything to do with the throttle," he insisted. "That was the feeling, as if I was picking up the throttle into the corner. "It was kind of like I was picking up the throttle before the apex, and washing out," he added. "As I jumped out of the car, my engineer said we see something on the data." On Friday, Russell had struggled to navigate turn 11 and went off there twice, once in FP1 and then later in FP2. “They both felt very odd to me," he said. "I don’t want to point blame somewhere else, but it’s something that I’ve never ever noticed before, never felt before. "It was clearly there in FP1 in my opinion, and as soon as I went out in qualifying, something wasn’t right.” It was particularly galling for Russell, after his team mate Lewis Hamilton had shown that the W13 was working well at the circuit by topping the times in first practice. "Obviously, it's disappointing for myself and the whole team as the car was looking strong here. Lewis was really fast, but unfortunately, I couldn't make it work. “We should’ve been fighting for pole position," he admitted. “The grip was feeling really strong. “You never want to be starting P11 in the Grand Prix when you’ve got the car to be fighting for victory,” he pointed out. "We're here to score points and ultimately this is a qualifying track." But while overtaking is difficult here, Russell isn't giving up hope for the race. "There’s been a safety car every single race, every single time we’ve been here," he observed. "The degradation is looking high and it could be a two stop race tomorrow. "Let’s hope there’s going to be a couple of pitstops - we’re going to try and do something different to our rivals." Gallery: The beautiful wives and girlfriends of F1 drivers Keep up to date with all the F1 news via Facebook and Twitter The post Russell blames 'progressively worse issue' for early exit appeared first on F1i.com.