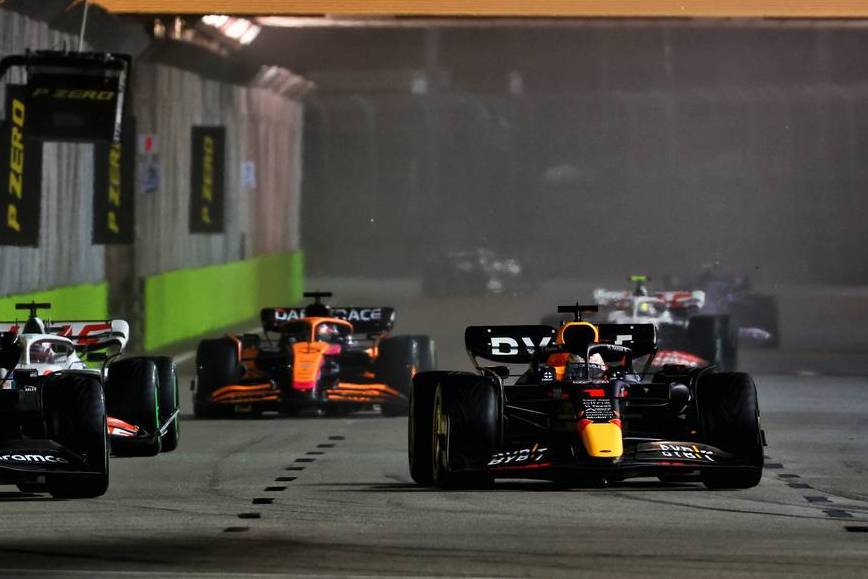 Max Verstappen says he hit anti-stall when the lights went out at the start of Sunday's Singapore Grand Prix, which immediately dropped him down to P12 as the field barreled down to Turn 1. The Red Bull driver who missed out on pole on Saturday due to a fuel miscalculation by is team had launched his race from P8, but the Dutchman was engulfed by several cars by the time he turned into the first corner. An eventful evening at Marina Bay marked by wet-to-dry conditions and a lack of grip led to many mistakes and offs for several drivers, including Verstappen. "Yeah, I dropped the clutch and hit anti-stall, so I need to analyse why that happened, but of course you lose a lot of spots. "From there, I tried to pass a few people, some worked, but then you get stuck in a little bit of a train. Everyone has their tyres up to temperature so it's really hard to follow. "Then of course we were a bit lucky, some people had a few mistakes. The championship leader quickly made up for his poor start and stabilized his position among the top ten, eventually moving up to P5 by the time he switched from the intermediates to the medium compound tyre. But on lap 40, Verstappen overcooked it during a tussle with McLaren's Lando Norris that led him the run-off area and back to the pits for another tyre change. "We were in fifth, tried to go for fourth to pass Lando and as soon as I got alongside him I braked, not even late, but I bottomed out because I was struggling already a lot there with bottoming and being offline it was probably even more bumpy. "So as soon as I braked, the front wheels jumped into the air, and that was it, I just went straight on. "I had to box again because of the massive vibrations, put new tyres on and come from last back into the points." Read also: Perez holds off Leclerc to win rain-hit Singapore GP Verstappen admitted that his botched qualifying on Saturday set him up for a difficult Sunday and a run to P7 that put an end to his remarkable streak of five consecutive wins. "It's not where we want to be, but it already of course starts from yesterday," he said. "You put yourself in a spot like that and it can either work brilliantly, you can drive back to the front, or it's very frustrating, like we had." As for snatching P7 by overtaking Sebastian Vettel on the penultimate lap of the race and splitting Aston Martin's drivers, it was but a meager consolation for the reigning world champion. "Better than eighth, but it's not what I'm here for, not with a car like that, what we showed in practice, it's just incredibly messy," Verstappen concluded. Keep up to date with all the F1 news via Facebook and Twitter The post Verstappen says 'anti-stall' caused poor Singapore GP start appeared first on F1i.com.