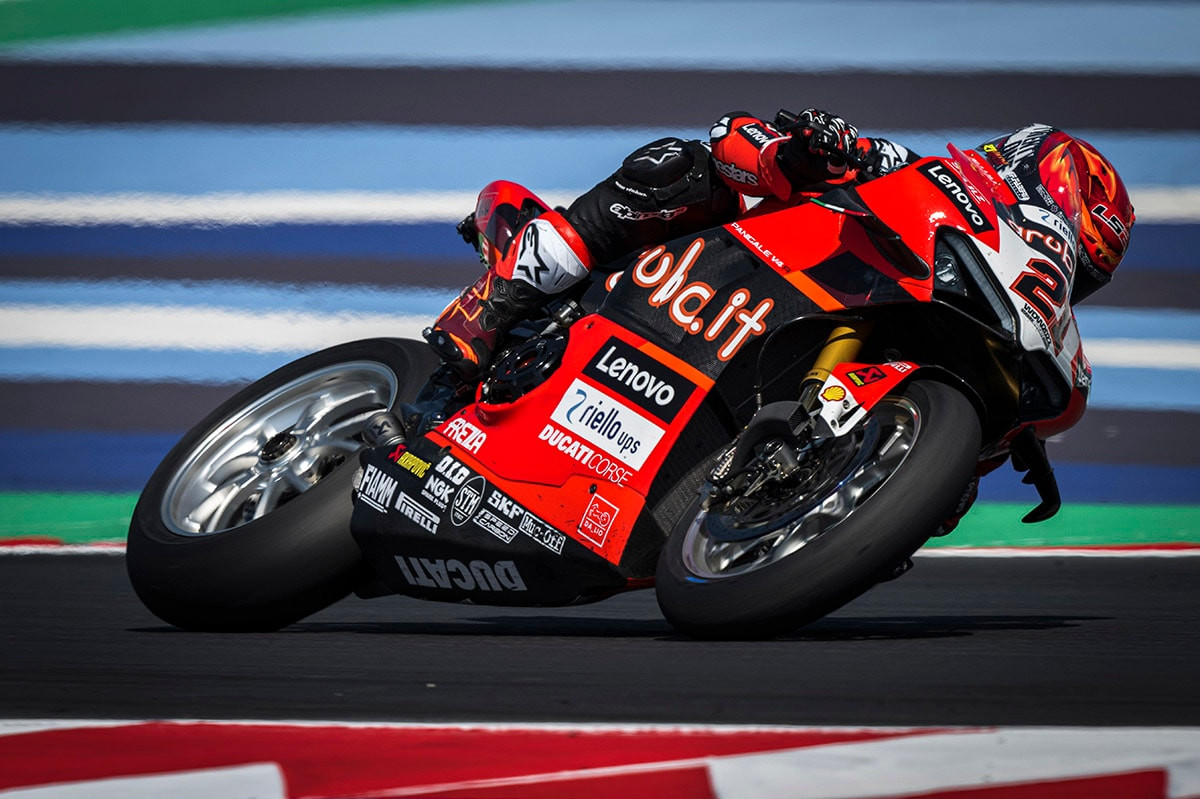 The Aruba.it Racing – Ducati team with Michael Rinaldi aboard the factory Ducati Panigale V4 R also in the 2023 WorldSBK season The Aruba.it Racing – Ducati team is pleased to announce the contract extension of Michael Rinaldi who will ride the official Ducati Panigale V4 R also in the 2023 WorldSBK season The Aruba.it Racing – Ducati team thus completes its line-up that will see the Italian rider alongside Alvaro Bautista in the upcoming World Superbike Championship. Michael Ruben Rinaldi was born in Rimini on 21st December 1995 and started racing with the minimoto when he was 7 years old, winning the Italian championship in 2006. After winning the Italian Sport Production Championship in 2011, in 2014 he faced his first international experience in the European Superstock 600 championship, which closed as runner-up in 2015. In 2016 Rinaldi rode the Ducati Panigale R of the Aruba.it Racing – Junior team in the SuperStock 1000 FIM championship, finishing sixth and then conquering the European Champion title at the end of the following season. With the Aruba.it Racing – Junior team, Michael Ruben Rinaldi also made his WorldSBK debut in the 2018 season, racing only in European rounds and then competing in all events of the 2019 Championship with the Barni Racing Team. In 2020 Rinaldi achieved his first WorldSBK success with the Panigale V4R of the Go Eleven team in Race 1 at Aragon, a weekend that also saw him on the podium in the Superpole Race (P3) and in Race 2 (P2). The 2021 season saw the Italian rider as the absolute protagonist of Misano round, with two victories ( Race 1 and SPR) and a second place (Race 2). Rinaldi then took his third win in Race 2 in Barcelona, ending the 2021 season in fifth place in the Superbike World Championship standings. In this season Rinaldi has finished twice on the podium in Misano, and once in the last race held in Magny-Cours: this second place during the French Round got him to the fourth place of the WorldSBK current standings. Stefano Cecconi (Team Principal – Aruba.it Racing – Ducati) “Michael has the potential to be one of the fastest riders in the World Superbike Championship and he has been able to prove it on several occasions. Our long journey together will be extended at least until the end of 2023, thus giving continuity and preserving the current team set-up that is also allowing us to be first in the manufacturer and team championships. We believe 2023 will be for  Michael the year of definitive consecration; at the same time, we are confident that during this second part of the season we’ll reap the benefits of the work done so far, in terms of satisfaction and consistency of results”. Paolo Ciabatti (Ducati Corse Sporting Director) “Michael Rinaldi is a young rider who grew up in Superbike with Ducati and has proven time and time again that he is very fast and knows how to make the most of the potential of the Panigale V4 R machine. That’s why we are also happy to count on him for the next Championship. With an extra year of experience with the official Aruba.it Racing – Ducati team, we are convinced that he will be able to aspire to even more important results in 2023” Michael Rinaldi (Aruba.it Racing – Ducati) “I am very happy to race again next year for Aruba.it Racing – Ducati because I firmly believe in this project. I am very confident that in 2023 we can reap everything we have sown together with the team. I will be the first to work even harder, both in training and on track, to get better results and have the consistency that has been lacking so far. I want to thank Stefano Cecconi, Claudio Domenicali, Luigi Dall’Igna, Paolo Ciabatti, Serafino Foti, and all the people who trusted in me. I can’t wait to be in Barcelona to get a good result and repay this confidence. And I am sure that 2023 will be a great year for us.” The post WorldSBK: Rinaldi Signs Extension With Aruba.it Racing Ducati appeared first on Roadracing World Magazine | Motorcycle Riding, Racing & Tech News.