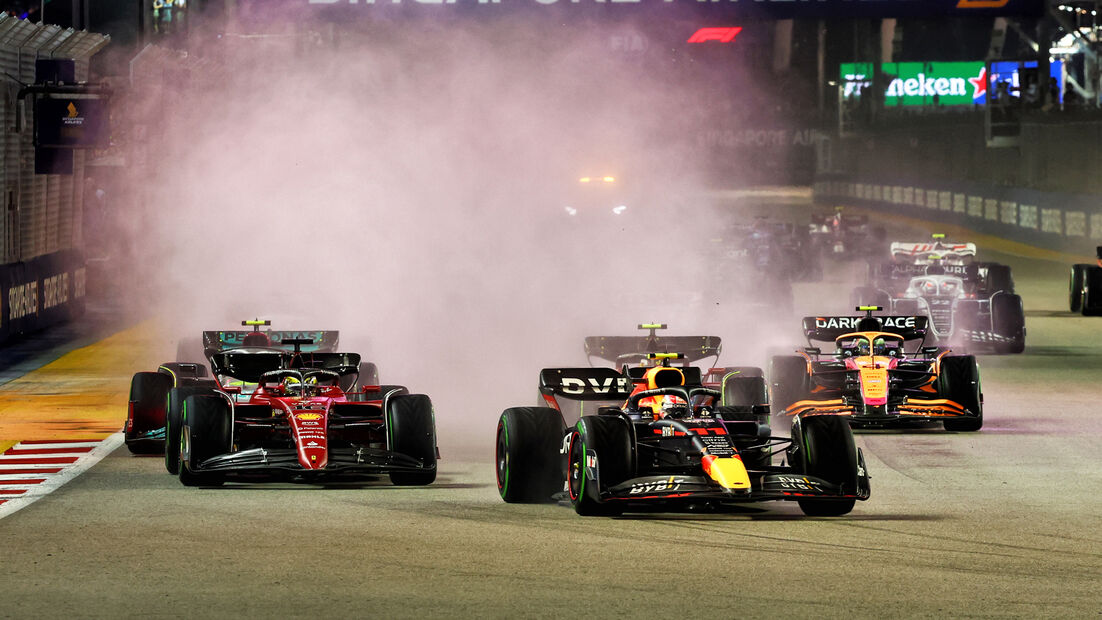 In the last part of the 2022 Formula 1 Singapore Grand Prix, Scuderia Ferrari Monegasque driver Charles Leclerc tried to put a lot of pressure on Sergio Perez, as both were running with new medium tyres. However, the narrow and twisty Marina Bay Street Circuit did not allow Charles to attempt an overtaking move and in the last few laps his pace dropped significantly. So much so that the Monegasque was unable to stay in the five second window from Sergio Perez who was under investigation for two separate safety car rule infringements.

Taking a look at a few numbers, the overall race pace graph reveals that Charles Leclerc was tied for fastest with Sergio Perez, even taking into account that the Monegasque then lost a lot of pace in the final laps and dropped back from the Mexican. In third position we find Carlos Sainz, who had a lonely race.

As for the degradation on the medium Pirelli tyres in the last stint, we do not notice big differences between the teams. The degradation of the compounds was high, around two tenths per lap. One wonders why Charles Leclerc was unable to stay in those crucial five seconds in the final laps of the Grand Prix. The reason seems pretty simple: the compounds overheated after several laps due to the F1-75 being stuck behind the Red Bull RB of the Mexican driver.

However, we are talking about tyres that work with a low working range, which is activated early by Ferrari and was perfect for those conditions. However, the set probably overheated more easily and this was an issue seen on the F1-75 car in the last two months, since the French Grand Prix.

During the last few laps at the Marina Bay Street Circuit, Charles Leclerc was unable to restore the temperature of his tires and, therefore, had to deal an important performance drop that can be summarized in the following image from funoanalisitecnica.com:

From the graph that shows the stint on the medium tire of Sergio Perez and Charles Leclerc lap by lap, we can see a clear drop from the tenth lap onwards. Ultimately we saw a Ferrari closer to the top and that at times was certainly faster than Red Bull, especially on the yellow tire in the first part of the stint.

Having said that, we have witnessed yet another showdown by Red Bull, which maintains a certain delta in favor between Saturday and Sunday. Ultimately, it remains clear that Charles Leclerc lost the Singapore Grand Prix in the first 400 meters. After that he had a race pace which was not superior enough to be able to find an overtaking move on a track that is well-known for not providing passing opportunities.

Which of 2022’s four lost F1 drivers will return to the grid in future? | Debates and Polls