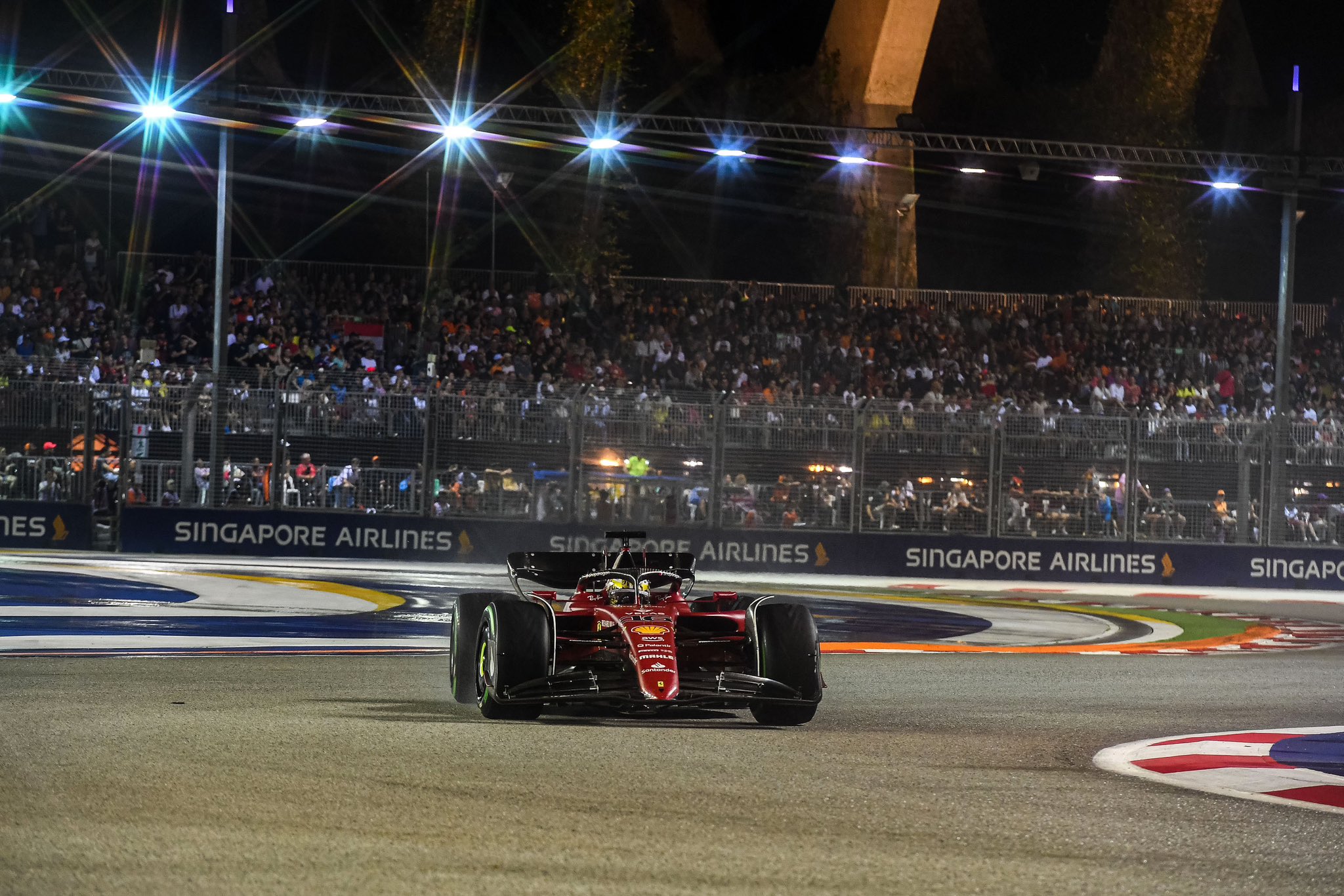 The umbrellas were up and ponchos going in the stand on the home straight, as thunderstorms hit the Marina Bay Street Circuit with one hour ahead of the start of the 2022 Formula 1 Singapore Grand Prix. The torrential which descended on Singapore led to the pit lane opening being delayed, which also meant a delay to the race start.

As expected, the rain was easing after almost 50 minutes of deluge, as the marshals were out on the track sweeping away the standing water, and it was just a question of how quickly they could get the track into a safe condition. We soon got confirmation that the race would start at 2105 local time, so one hour and five minute delay overall.

The fact that was an hour delay meant the rack was in pretty decent condition by the time we got under way at the Marina Bay Street Circuit. That meant that drivers didn’t need wet tyres, and were able to get away with starting on intermediates. Therefore, one of the key moments of the race was the likely transition from inters to slicks, given that no more rain was expected in Singapore this evening. At the same time, the 27 seconds drivers lose for a pit stop here meant that teams would be looking out for an opportunity to stop under a safety car or virtual safety car.

After three years (plus an extra hour this evening) Singapore’s wait for a Formula 1 race was almost over: this was the stunning scene of the Marina Bay Street Circuit, as we were just a couple of minutes away from the formation lap getting under way, as every driver decided to start the race on intermediates given the track conditions.

Lots of caution was required from the drivers in the early stages and unfortunately Sergio Perez got a better start and passed Charles Leclerc off the line. Lewis Hamilton got caught behind the Monegasque slow getaway, which helped Carlos Sainz move up to third place. Not a great start from Max Verstappen as he got away slowly and slipped down the field to be running 12th in the early stages.

The stewards took a look at what was a little bit of contact between Carlos Sainz and Lewis Hamilton, and decided there was no need for any further investigation. George Russell was making some early progress, he got past both Williams and Zhou Guanyu to climb to 17th after starting from the pit lane.

After nine laps, Alfa Romeo’s Zhou Guanyu was parked up on the side of the track and that was the end of the his race, while Nicholas Latifi was trying to limp back to the pits with a puncture, which was caused by him driving across the front of Guanyu and clipping his front wing. With Zhou’s car in a dangerous position, we had the first safety car of the day. The field decided there was nothing to be gained by stopping at this point, so the main impact of this safety car was bunching up the field, which was good news only for Max Verstappen down in ninth.

No nonsense from Sergio Perez as he slowed the pack down before pulling away to hold his lead ahead of Charles. Lewis Hamilton appeared to have shown improved pace since the restart, and was just over a second back from Carlos Sainz, as the Spaniard did not seem able to match the pace of his Maranello teammate, running almost one second slower per lap.

On lap 21, Fernando Alonso was out of the race with an engine issue, and we had a virtual safety car. The leaders decided not to pit, but George Russell came in from 15th and the Mercedes driver was the first to put a medium compound set of slick tyres on. But George Russell was not enjoying life on the slicks and told his team over radio he had “no grip”.

A few moments later there was a silly error from Alex Albon who hit the barriers and we had a virtual safety car again. His front wing stayed in the barrier, but he was able to get the car back to the pits. The front wing was out the way and the race was back under way, but just one lap later the other Alpine appeared to be in trouble, with Esteban Ocon having stopped due to a technical failure. There was another Virtual safety car period, but once again none of the top six went for a strategy chance and continued on track.

On lap 32, Lewis Hamilton went into the barrier, but he appeared to be ok to continue. He got his car moving again and resumeed between Lando Norris and Max Verstappen in fifth. There did appear to be some damage, but he was keeping Verstappen behind him, just as Ferrari made the first move. Charles Leclerc was the first of the Ferrari cars into the pits and he comes back out on the medium tyre. However, it took 5.3 seconds for that stop. Not great from Ferrari. Carlos Sainz, Sergio Perez and Max Verstappen also moved to mediums, whileYuki Tsunoda went into the barrier and we got a full safety car: This helped McLaren drivers Daniel Ricciardo and Lando Norris, who both hadn’t stopped. Luckily for the Maranello team, Carlos still managed to keep his third place, despite Norris’ pit stop under SC.

At this stage it become clear that the he full 61 laps would not be completed within the two-hour time, so the clock dictated the end of the race. The leaders held position as the race restarted, but Max Verstappen then tried to make a move on Lando Norris had a huge lock-up. He went into the escape road and came back out on track in eighth, ahead of Lewis Hamilton. But Verstappen needed to pit after flat-spotting his tyres.

Charles Leclerc was hunting down leader Sergio Perez and was setting the pace with a fastest lap so far of 1:53.302. And for the first time in the race, we had DRS enabled. Carlos Sainz had been struggling for speed all day, and now he had his former team-mate Lando Norris pressuring him. The Mexican driver was still out in front, but Charles was swarming all over the rear of the Red Bull with less than a second between them. The Monegasque driver tried everything to get agead of the Red Bull driver and win the race at the 5.063-kilometre Marina Bay Street Circuit, but the straight just isn’t long enough here and the track layout made it difficult to attempt an overtaking move for the victory.

At the same time, we received confirmation that the stewards would investigate Sergio Perez after the race over a possible safety car infringement. On the track, Sergio Perez set the fastest lap of the race so far with a 1:48.841 and he opened the gap between him and the Monegasque out to over three seconds.

It had been a pretty miserable evening for Lewis Hamilton, as what was an outside chance of victory turned into a fight for the lower points places. However, the racer in him probably enjoyed what became a three-way battle for seventh, with Sebastian Vettel leading the Brit and Max Verstappen. They three were going round the track separated by little more than a second.

Charles Leclerc was really struggling on the used medium tyres in the last moments of the Singapore Grand Prix and was not able to remain within five seconds of Sergio Perez, in the hope of a penalty for the Mexican driver after the race. One more time around for the drivers, with Sergio Perez leading the Ferrari duo of Charles Leclerc and Carlos Sainz. A double podium finish for the Ferrari boy, but some regret for the Italian side, who lost the race at the start.