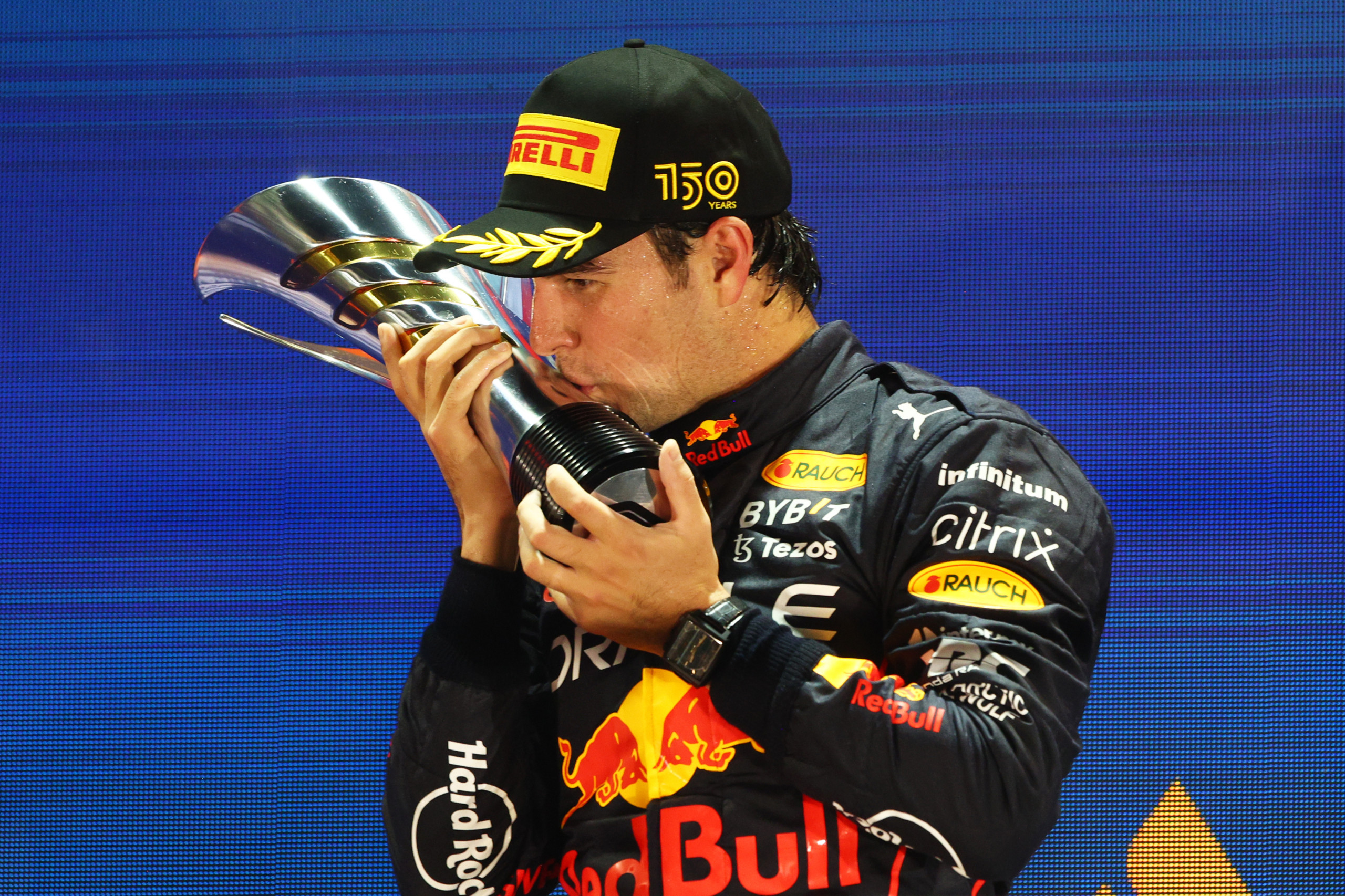 Sergio Perez survived a late-race onslaught from Charles Leclerc to provisionally take victory at the Singapore GP but finished under a cloud as he awaits the results of an investigation for an infringement under the Safety Car.

The Mexican took the lead at the start of the race and was never headed, in a race where he and Leclerc were the class of the field, finishing well ahead of Carlos Sainz who came home third in the second Ferrari. With Max Verstappen only finishing in seventh after an eventful afternoon, the championship battle continues onto next week’s race at Suzuka.

The race start was delayed due to torrential rain at the start, meaning that the formation lap finally got underway 65 minutes later than originally planned, at 21:05 local time. The entire field started on intermediate tyres, with conditions much wetter than they were in qualifying on Saturday.

Those on the traditionally ‘dirtier’ side of the grid got the better start, with Perez comfortably ahead of Leclerc before they hit the brakes for turn one. Sainz was also able to get ahead of Lewis Hamilton but it was a lot less straightforward for the Spaniard, as he made contact with Hamilton’s Mercedes before finally staying ahead. This was the start of a frustrating race for Hamilton, as he spent the first half staring at the diffuser of Sainz’s Ferrari.

It was a difficult start to the race for Max Verstappen, who bogged down at the start, dropping down to twelfth on the first lap. The reigning champion didn’t waste any time moving through the field, however, quickly dispatching Kevin Magnussen (after contact between the two which caused the Dane to pit) and Pierre Gasly to get back into the points.

It was an attritional race at the Marina Bay circuit, with multiple safety car and virtual safety car periods. The first safety car came after Nicholas Latifi squeezed Zhou Guanyu into the wall as the Alfa Romeo attempted an overtake, with the resulting damage causing both to retire. Latifi was given a five-place grid penalty for Suzuka after the incident.

The next three interruptions were all virtual safety cars. Fernando Alonso was doing a superb job of keeping Verstappen behind in his 350th race, before pulling off with power unit issues. Shortly after, Alex Albon made contact with the wall, leaving his front wing out on track before retiring in the pits. Esteban Ocon compounded a miserable day for Alpine when his engine failed spectacularly on lap 28, as the Enstone-based team failed to score points for the second race in a row.

In a carbon copy of yesterday, the track reminded slippery well after the rain had stopped, meaning drivers had to struggle around on their old intermediates. The first person to try something different was George Russell, who had been stuck in a train all race after starting from the pit lane. His medium tyres looked to be the wrong call, before finally coming into their own by lap 34, as he started setting purple sectors.

This led to a glut of cars coming into the pitlane, including Hamilton, who had to change his front wing after making contact with the barriers at turn seven. McLaren stayed out longer than everyone else, and their gamble paid off when Yuki Tsunoda crashed into the wall at turn ten after hitting a wet patch, bringing out the race’s second full safety car. This allowed Norris to retain his fourth place after the pitstops and brought Daniel Ricciardo up into sixth, with Verstappen sandwiched in between.

The Red Bull got a superb run on Norris into turn seven on the restart, but locked up on the damp part of the circuit, dropping down to last after taking to the escape road. He was able to recover back to the pits and put on a fresh set of soft tyres, eventually recovering to seventh place after a fantastic battle in the final laps with Hamilton and Sebastian Vettel. Hamilton nearly another collision as he tried to overtake Vettel, with his front wing coming within inches of the Aston Martin’s rear tyre, as Lewis ran deep to allow Max through.

Out in front, Perez and Leclerc were quickly able to pull away from Sainz and traded fastest laps with each other for the first laps after the restart. Even after DRS was activated, however, the Ferrari was not able to get close enough to Perez when it really mattered, with a small mistake in the final sector from Leclerc dropping him out of DRS range, and giving Perez a clear path to on-track victory.

The late drama with the leaders came as the FIA announced that Perez’s alleged safety car infringement would be investigated after the race. Red Bull were wise to any potential penalties, quickly telling Perez to up the pace, as he finished 7.7s ahead of Leclerc in second. However, with Perez under investigation for both safety car restarts, it is possible that Leclerc may still be awarded the victory.

Both McLarens finished in the top five, as they jumped Alpine to take fourth in the constructor’s championship. Lance Stroll finished sixth, his best of the season, ahead of Verstappen, Vettel, Hamilton and Gasly. The double points finish for Aston Martin means they leap both Alpha Tauri and Haas in the constructor’s championship, with the Silverstone squad now three points ahead of Haas and Alpha Tauri in the battle for seventh.

Results today mean Perez and Leclerc still have a mathematical chance of claiming the world championship. A win for Verstappen with his two rivals failing to finish second would secure a second world championship for the Dutchman, who will be hoping for a much more straightforward race next weekend.