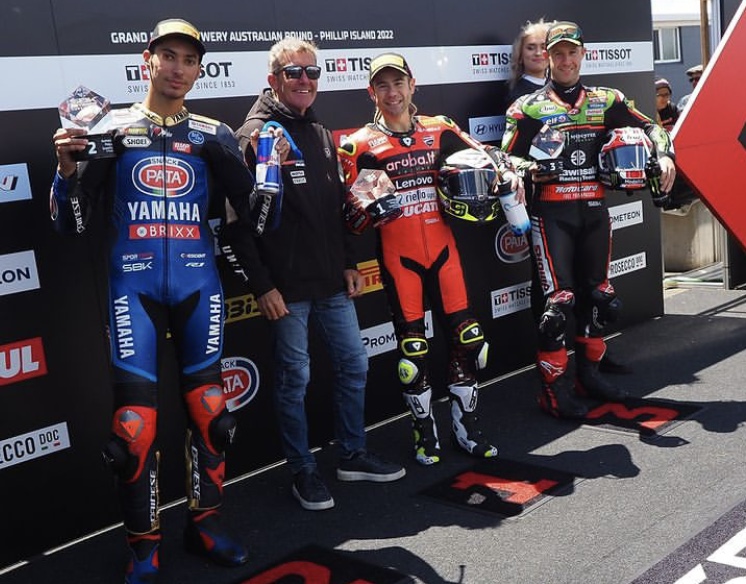 It’s the last dance. Who would snatch victory in the last race of the season?

The earlier superpole race saw the new world champion, Alvaro Bautista (Aruba.it Ducati), take a gamble with slick tyres on a wet track that was drying out, a gamble which paid off. Bautista clinched the win, followed by Toprak Razgatlioglu (Pata Yamaha), and Jonathan Rea (Kawasaki KRT).

Conditions for race 2 were dry, if not cold, with air temperature only about 15 degrees Celsius.

Lights out then for race 2, and it was Bautista with the hole shot into turn 1, followed by Rea and Redding (BMW Motorrad) who got a great start from 6th on the grid. Massive drama then for Gerloff (GRT Yamaha) and Vierge (Honda HRC), the Texan clipped the rear end of the former Moto2 rider into turn2, sending both of them careering off track. Both their seasons were now over. Meanwhile Rea was looking to make an early impact, and took over the lead into turn 3, diving under Bautista, Redding sensed an opportunity, and so to also passed Bautista.

Next lap and positions were: 1. Rea 2. Redding 3. Bautista 4. Toprak 5. Lowes (Kawasaki KRT) 6. Locatelli (Pata Yamaha) 7. Rinaldi (Aruba.it Ducati) 10. Laverty (Bonovo Action BMW) 11. Baz (Bonovo Action BMW). As he had been all weekend, Lowes was looking quick, and set the new fastest lap with a 1:30.991, going around the outside of Bautista in the process, and into 3rd.

With 18 laps remaining Bautista blasted past both Lowes and Redding down the straight and into turn 1 to take over 2nd. Toprak moved up to 3rd, with Lowes in 4th, and Redding bumped down to 5th.

Next lap, and Rea was riding defensively, as Bautista was looking to retake the lead, and was applying pressure. Locatelli was next to get through on Redding, and he moved into 5th, with Scott now in 6th. Meanwhile in the lead Rea held a gap of 0.2s.

Next lap and Bautista made his move on Rea, powering past the ZX-10RR down the straight and into the lead. Toprak was 3rd, Lowes 4th, Locatelli 5th, Redding 6th, and Rinaldi 7th. As was the story in race 1, the leading 4 were pulling away from the rest, and there was a sizeable gap now.

With 15 laps left to go, Bautista was looking to make it two wins out of three, and posted the new fastest lap with a 1:30.2. Lowes held a gap of 2.1s to Locatelli behind in 5th.

With 12 laps remaining, Rea wasn’t giving up and was pressing Bautista, and looking for the pass. Toprak in 3rd, was starting to lose contact with the two ahead of him, as the pace was ramped up. Lowes was still in 4th, and looked to be managing his tyres better than Toprak.

Just over half race distance, and Bautista looked to be suffering from rear tyre grip issues, with the back of his Panagale sliding out into most corners. By contrast Rea looked to be managing his tyres perfectly, and the Kawasaki looked to have the better drive out of corners. The gap between them was 0.4s.

With 8 laps left, Lowes got the better drive out of turn 12 and down the straight to come through on Toprak, and take over 3rd. The gap to his team mate in 2nd was 1.7s. Meanwhile Rea had cut the gap to Bautista to 0.2s and was looking to make the pass.

Then with 5 laps remaining, huge drama as the race is red flagged due to a crash between Laverty and Xavi Fores into turn 1. Both riders were conscious, but it was a high speed crash, and precautions were rightly taken. As 2/3 of the race distance had been covered, the positions at the end of the previous lap were taken as final. That meant Bautista won the final race of the season, to cap off an already impressive season.

See you next season race fans!!!

Deadline set to decide fate of 2024 UK WRC round bid

Deadline set to decide fate of 2024 UK WRC round bid