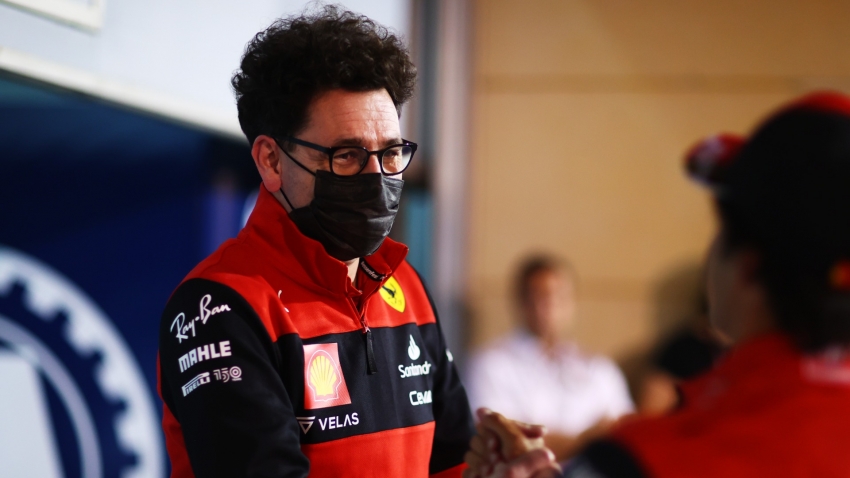 Scuderia Ferrari team principal Mattia Binotto feels Red Bull’s Sergio Perez should have been given two penalties at the Marina Bay Street Circuit on Sunday, as the Mexican driver did not stay within 10 car lengths while behind the Safety Car on two different occasions during the Singapore Grand Prix.

Sergio Perez took the race win at the Marina Bay circuit, with a lead of 7.595s ahead of Charles Leclerc, as the Ferrari driver’s tyre were done in the final laps of the race, after the Monegasque tried to push hard in an attempt to overtake the Mexican, which was not possible due to the track characteristics of the Marina Bay circuit. In the final stages of the Singapore Grand Prix, Charles Leclerc was not able to match the pace of the RB18 and fell behind to almost eight seconds, but still Sergio Perez’s victory win in doubt.

The Red Bull driver met with the stewards to provide explanations for an alleged breach of Article 55.10 of the FIA Formula One Sporting Regulations, that states drivers must keep within 10 car lengths of the Safety Car.

Ferrari boss Mattia Binotto pointed out that there were actually “two infringements” as, behind both Safety Car periods during the Singapore Grand Prix, the Mexican made a mistake and fell back by more than ten car lengths both times.

“There were two infringements behind the Safety Car, so it can twice be a penalty. But we can only trust on what they decide,” the Ferrari team boss said, in an interview for Sky Sports after the race – “On the occasion of two different Safety Cars, he made the same mistake, being too far from the car. If I look at similar cases, like Antonio Giovinazzi in 2019, the driver was punished with 5 seconds and I believe that the sporting regulations impose a penalty of 5 seconds, 10 or a drive through.” – he added.

The Ferrari team principal therefore recalled the events which took place the last time Formula 1 visited Singapore, back in 2019, when Alfa Romeo’s Antonio Giovinazzi received a 10-second penalty for failing to follow the race director’s instructions and causing an unsafe situation, as the Italian driver moved too close to a crane behind the Safety Car.

Sergio Perez’s investigation was made only at the end of the race, with race stewards conveniently giving him just a five-second penalty and a reprimand, which is just enough to allow him to keep the race win, while also making it seem as if the infringement was penalized.

Red Bull team principal Christian Horner of course highlighted Sergio Perez’s explanation that there were mitigating circumstances given the track conditions and the fact that drivers were having a hard time trying to get heat into their tyres behind the slow Safety Car.

“I think there’s so many precedents that we’ve seen, even in recent past where there’s been a concertina going on both up and down the field, we see it. We’ve seen it even on formation laps. I think, again, the mitigating circumstances were that the Safety Car was just driving so slow. And they’d spent what 30-odd laps on inter tyres, they’re all out there on a set of slicks. You could hear Checo screaming to get [on], because they pick him up first. So he had no temperature in his tyres.” – he concluded.

Ahead of the Japanese Grand Prix, which takes place next weekend, Scuderia Ferrari driver Charles Leclerc now only has a two-point advantage over Sergio Perez in the fight for second place in the Drivers’ standings.